This story is part of a WHYY series examining how the United States, four decades later, is still processing the Vietnam War. To learn more about the topic, watch Ken Burns and Lynn Novicks’ 10-part documentary “The Vietnam War” running Sunday, Sept. 17 at 8 p.m. through Thursday, Sept. 28 on WHYY-TV.

There’s a ceremony tonight along the polished granite walls of the Philadelphia Vietnam Veterans Memorial at Spruce Street and Columbus Boulevard.
It’s been 30 years since the monument’s inception. It bears the names of 648 native sons killed in the war that spanned two decades and ripped this country apart philosophically, politically, and emotionally before ending with the fall of Saigon in 1975. 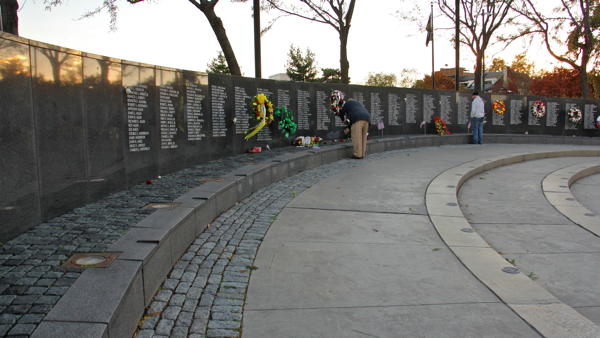 Terry Williamson served as a U.S. Marine against the North Vietnamese in the late 1960s; he was discharged as a captain. Then he protested the war and later helped lead the effort to build Philadelphia’s Vietnam memorial. He now aids in its oversight.

Morning Edition host Jennifer Lynn spoke with Williamson recently about the memorial and what it was like when he returned to the states during at the height of the anti-war movement in the early 70s.
To learn more, watch Ken Burns and Lynn Novicks’ 10-part documentary “The Vietnam War” running Sunday, Sept. 17 at 8 p.m. through Thursday, Sept. 28 on WHYY-TV. WHYY Members will have extended on-demand access to the series via WHYY Passport through the end of 2017.

With the release of Ken Burns' documentary series "The Vietnam War," WHYY News is examining how the United States, four decades later, is still processing the war.

Veterans and family members honored prisoners of war or those missing in action to mark the 30th anniversary of the Philadelphia’s ...

Photos give a new way to permanently honor Vietnam veterans in Washington, D.C.

A group is collecting photos of all veterans killed in Vietnam as part of a new education center to be built on the National Mall. ...

Over the weekend, a 300-foot replica of the Vietnam Veterans Memorial will be on display in a baseball field in Penndel, Bucks County. As ...