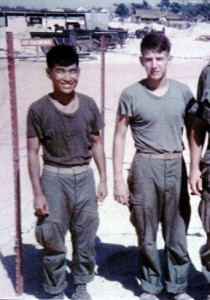 Two young Marines with very different backgrounds – one a rural Pennsylvanian, and the other from a small Japanese city – are wounded while fighting in Vietnam in 1968 and reunite decades later. Our guests — BILL EHRHART, a teacher at The Haverford School, and KEN TAKENAGA, who works in Japanese tourism — join us to discuss their trip through Japan and Vietnam 43 years after the war that brought them together. Ehrhart has written a memoir on their friendship and journey called “Ken and Bill’s Excellent Adventure.” He also has a new book of essays: “Dead on a High Hill: Essays on War, Literature and Living, 2002-2012.”