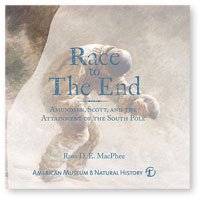 [REBROADCAST] Just over a hundred years ago, Roald Amundsen and four companions were the first human beings to stand at the South Pole. Using skis and dog sleds they beat Robert Falcon Scott’s British expedition by just a few weeks. Scott and his men reached the South Pole only to find Amundsen’s Norwegian flag planted in the frozen ground.  They died on their return journey not far from their base camp. What made the South Pole such a prize and what motivated these men to venture into one of Earth’s most inhospitable environments? Amundsen and Scott’s heroic and tragic histories are retold with amazing original photographs in ROSS MacPHEE’s book, “Race to the End: Amundsen, Scott and the Attainment of the South Pole.”  MacPhee is mammal curator at the American Museum of Natural History in New York and a polar explorer himself – he travels regularly to Antarctica to search for ancient mammal fossils.  Marty spoke to MacPhee this winter about what it took explore this frozen desert a century ago.