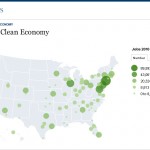 So-called “green jobs” were a central part of candidate Barack Obama’s stump speech on his way to the presidency in 2008. These were billed as the next most important hope for the U.S. workforce. But with the U.S. unemployment rate still high at 9.2 percent, the green job sector has not grown fast enough to make a dent in the overall job loss numbers. President Obama’s Council of Economic Advisers credits the 2009 economic stimulus package with creating or preserving 225,000 clean energy jobs. And a new report by the Brookings Institution attempts to capture the size and nature of the U.S. “clean economy,” and argues it’s bigger than you think. Surveying the nation’s 100-largest metropolitan area, Brookings finds the “green jobs” sector employing nearly 3 million people, is heavily oriented towards manufacturing and exports, and pays good wages, especially in jobs requiring mid-level skills. Joining us to discuss the “clean economy” in the United States is JONATHAN ROTHWELL, senior research analyst at Brookings’ Metropolitan Policy Program. And SUE HOFFMAN, Senior Associate, Strategy and Innovation at the Philadelphia Workforce Investment Board, will discuss green jobs in the Philadelphia region. We’ll also hear from ROGER MEINERS, Goolsby Professor of Economics and Law at the University of Texas, Arlington, Senior Fellow at the Property and Environment Research Center and co-author of the new book, The False Promise of Green Energy.

The tool provides a regularly updated look at the local economy, with results that can be filtered by ZIP code, industries, and other factors.