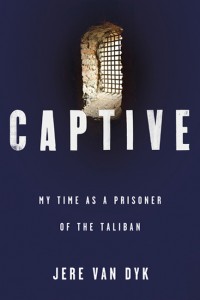 Six years after Daniel Pearl was kidnapped and eventually killed, veteran journalist JERE VAN DYK was captured in February 2008 by the Taliban in the tribal lands along the Afghanistan-Pakistan border. He was held for 44 days in a dark cell, but lived to tell the tale in a new book, Captive: My Time as a Prisoner of the Taliban. Van Dyk reported amongst the mujahedeen fighting the Soviets in the late 1980s in that same area, and is among the West’s most knowledgeable journalists about one of the world’s most dangerous – and important – regions. The CBS News Afghanistan expert joins Marty to talk about his captivity, and the prospects for victory and peace in Afghanistan.

What Russia’s retreat means for the war in Ukraine

Russian troops withdrew from Kherson last week, a major victory for Ukraine. We'll talk about what it signals about Russia's military and strategy and where the war is headed.

Amid the war ruins in Ukraine, Banksy seeds art

A painting of a gymnast doing a handstand has popped up on the wall of a wrecked building outside of Kyiv and appears to be the work of graffiti artist known as Banksy.