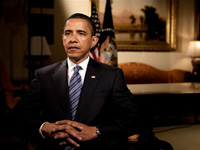 More than a year after his election, a few days since announcing a major shift in strategy in the war in Afghanistan, and a week before accepting the Nobel Peace Prize, we take stock of President Obama, how he’s doing and his record of accomplishments, especially in light of two wars, a lengthy domestic agenda punctuated by health care reform and economic stimulus, and much more. Joining us on Radio Times are JANE HAMSHER of the liberal firedoglake blog, and JOHN H. RICHARDSON, who writes the Richardson Report column for Esquire Magazine.
Listen to the mp3

Biden is pushing a plan to significantly expand the safety net, provide more resources for education, and invest heavily in infrastructure and green energy.

The Office of Worker Protections is too cash-strapped to do its job, said city councilmembers and workers’ rights groups who are demanding more funding.