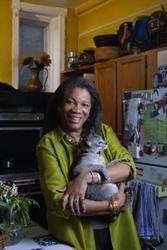 [REBROADCAST] Black-eyed peas, watermelon and okra came to American tables from the slave ships of Africa. The 19th century black cooks on the Pullman railroad dining cars and cowboy chuck wagons helped define what Americans eat today. Food historian and cookbook author JESSICA B. HARRIS joins us to discuss her career chronicling the African American food diaspora. She is the author of more than 11 books on the subject, including Iron Pots & Wooden Spoons: Africa’s Gifts to New World Cooking, and The Welcome Table: African American Heritage Cooking. Her recent book, High on the Hog: A Culinary Journey from Africa to America, covers many topics: including the West African food eaten in pre-slavery days; “culinary apartheid,” or the little access to nutritious foods in low-income urban neighborhoods; and analyzing current cable TV food show personalities. Philadelphia, known for its classic pepperpot soup of inexpensive meat and greens, played a big role in the African American kitchen. George Washington brought his slave, a sophisticated French–influenced chef, Hercules, up from Virginia, and he influenced the way big kitchens were run. African-American entrepreneur Robert Bogle helped people understand they could hire out their own ‘public’ butler for special events – establishing what we know today as booking a caterer.

A craft brewer in Ukraine switched from making beer to making Molotov cocktails. Brewers around the world pick up the slack.

McDonald’s, Starbucks, Coca-Cola, PepsiCo and General Electric all announced they were suspending their business in Russia in response to the country’s invasion of Ukraine.

For every dollar spent at Craft Hall Thursday night, $2 will be donated to Voice of Children, a foundation founded to help children in Ukraine.