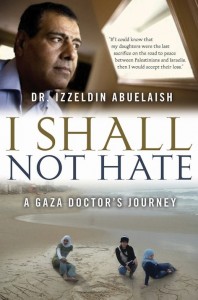 Dr. IZZELDIN ABUELAISH lost three of his daughters and his niece to a shell launched at his apartment in Gaza by Israeli Defense Forces in January 2009, while another daughter was critically injured. Moments later, Israeli TV viewers heard the desperate wails of Dr. Abuelaish live, as he called his TV correspondent friend for help finding an ambulance. Dr. Abuelaish had been providing frequent reports about the Gaza war for Israeli TV, as he was one of the few Hebrew speakers in Gaza. His Hebrew enabled him to work as an obstetrician and gynecologist specializing in infertility in Israeli hospitals, crossing checkpoints every day to go to work. And Dr. Abuelaish, despite his tragic loss, continues to cross barriers, overcoming grief to become an inspiring advocate for peace for people of many faiths. He created Daughters for Life in his daughters’ memory, a foundation dedicated to providing education and health services to women and girls throughout the Middle East. His new book is I Shall Not Hate: A Gaza Doctor’s Journey on the Road to Peace and Human Dignity.

A new report from the United Nations estimates that 17% of food produced globally is wasted each year. But the report notes the need for better data on food waste globally.