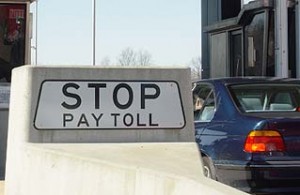 With state, local and federal governments all strapped for cash in the wake of the recession, new attention is being paid to public-private partnerships as a mechanism for funding critical needs like infrastructure repair. Pennsylvania’s effort to toll I-80 was shot down by federal regulators, but Governor Rendell remains committed to finding ways to pay for the Keystone State’s transportation systems. And New Jersey Governor Chris Christie has tapped a Privatization Task Force to come up with ideas about how to take more of the Garden State public budget into the private sector. Joining Marty in studio to talk about this effort will be RICHARD “DICK” ZIMMER, former New Jersey congressman and the man tapped to head Governor Christie’s task force, and JOHN A. FLAHERTY, principal for Global Infrastructure at The Carlyle Group and former chief of staff of the U.S. Department of Transportation. Then we’ll hear from PHINEAS BAXANDALL, senior analyst for tax and budget policy at the U.S. Public Interest Research Groups, who has a critical view of public-private partnerships.

Piedmont, a subsidiary of American Airlines, is a regional carrier with hubs in Philadelphia and Charlotte that flies to more than 55 cities around the United States.

Biden is pushing a plan to significantly expand the safety net, provide more resources for education, and invest heavily in infrastructure and green energy.