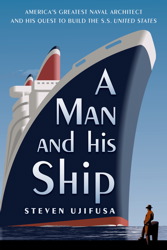 “Getting there is half the fun,” is rarely a desire of the modern traveler, but back when the S.S. United States made its maiden voyage, this passenger luxury liner was built for speed and comfort. It has been 60 years since Harvard College-drop out and self-taught engineer William Francis Gibbs’ technological masterpiece was launched. She carried dignitaries and Hollywood starlets, her image has been featured in high-profile films, and her top-secret speed broke many nautical records in her time. Now the ship’s two red, white, and blue funnels’ peeling paint is an image peering out from its docking on the Delaware River in South Philadelphia, a memory of America’s postwar maritime greatness. Historian STEVEN UJIFUSA tells the story of Gibbs and his dream ship in, “A Man and his Ship: America’s Greatest Naval Architect and His Quest to Build the S.S. United States.”

The ban will affect 7,300 flights — and more than 2 million airline seats — scheduled from 26 European nations to the U.S.

NPR’s Frank Langfitt on “The Shanghai Free Taxi” and Brexit

The former Shanghai correspondent discusses his new book, "The Shanghai Free Taxi: Journeys with the Hustlers and Rebels of the New China."

Japan has ambitious goals to become the “hydrogen society,” and right now, the focus is on its automakers.