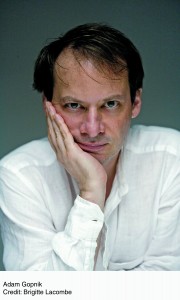 Journalist and cultural critic ADAM GOPNIK believes “what goes on around the table matters as much to our lives as what appears on it.” The Philadelphia-born staff writer for The New Yorker has spent many years traveling across the Atlantic deepening his Francophile leanings, filing essays for over 25 years in the weekly magazine. Using these pieces as ways to find the true meaning for food in our lives, he shares his cooking secrets, describes the first modern restaurant in 18th century Paris, ponders ‘localism,’ and examines the vegetarian debate among many other topics in The Table Comes First: France, Family and the Meaning of Food, an expansion of The New Yorker essays. Gopnik is the author of several books including Paris to the Moon (his 2001 book chronicling the five years he moved his family to Paris), Through the Children’s Gate, Angels and Ages: A Short Book about Darwin, Lincoln and Modern Life and Winter: Five Windows on the Season.

Cooking adventures from your home kitchen

At the beginning of the pandemic, people turned to their kitchens for creativity. But as we continue to stay at home, how can we enjoy and remain inspired by cooking?

Philly’s Italian Market sees a busy Christmas Eve, as families shop for a taste of tradition

From pozole to baccala, holiday food brings happiness in South Philly, with some residents following traditions and others trying something new.

Eat, drink and be wary? How to stay safe this pandemic Thanksgiving

Here’s what you need to know about gathering in the Delaware Valley, plus tips on how to keep everyone safe.