Dozens of candidates are lining up for Philadelphia City Council races this year, where outcomes are often determined by the support of Democratic Party leaders.

But a surge of turnout among younger voters since the election of Donald Trump has inspired hope among progressive activists that they can influence the next generation of leaders at City Hall.

“I think that the impact we’ll have on City Council elections will be pretty significant,” said Amanda McIllmurray, lead organizer for Reclaim Philadelphia, a progressive group that grew out of the Bernie Sanders presidential campaign. “We’re looking to knock on tens of thousands of doors and engaging our neighbors with a lot of [the organizational] infrastructure that we’ve built over the past two years.”

Al Schmidt, one of the three Philadelphia city commissioners who runs elections in the city, said he’s tracked voter turnout by age group for several years, and turnout among 18- to 34-year-olds has long been abysmally low.

But that changed after the 2016 presidential election, he said.

“What we’ve seen is just an extraordinary increase in participation by younger voters,” he said.
In the 2017 primary, turnout among 18- to 34-year-olds nearly tripled compared with the previous comparable election, helping to elect progressive District Attorney Larry Krasner and ousting incumbent City Controller Alan Butkovitz in favor of first-time candidate Rebecca Rhynhart.

The surge didn’t die after that first post-Trump election. It continued through the 2017 general, the 2018 primary and the 2018 general election, when 18- to 34-year-olds cast more votes than any other age cohort in the city. 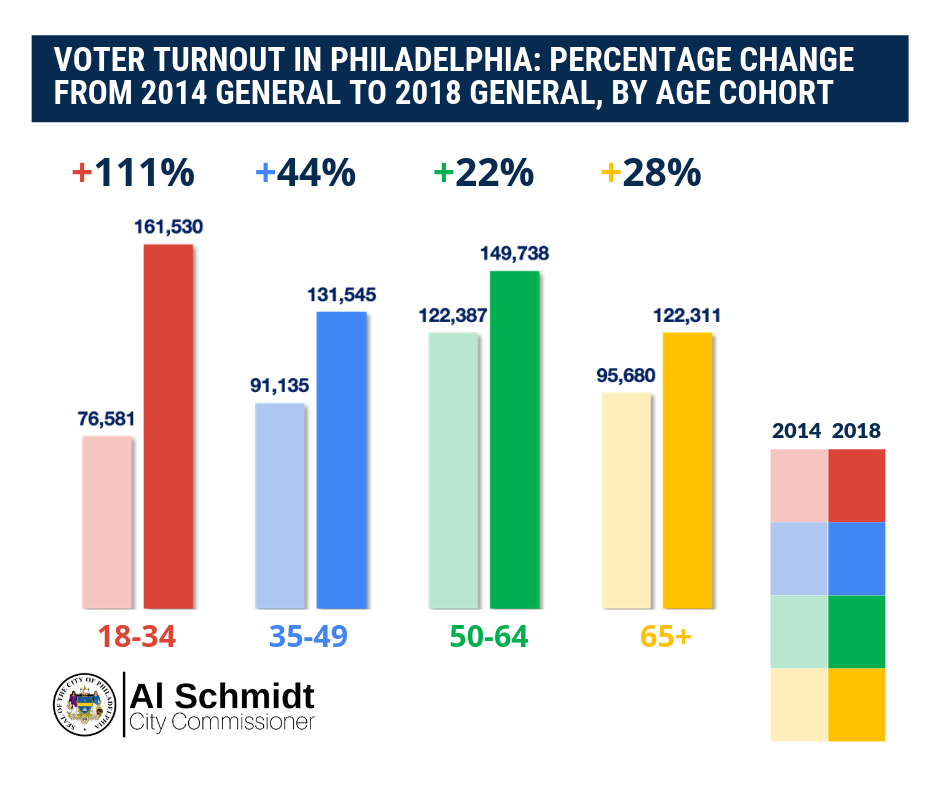 The impact of a continued surge of younger voters in 2019 might be greatest in the Democratic primary for City Council-at-large seats, where voters can choose up to five candidates from a long list of usually unfamiliar names.

Many bewildered voters skip the race altogether or choose candidates recommended by party poll workers. That gives plenty of influence to the party’s 69 ward leaders, who can instruct their committee people which candidates to recommend at polling places in their wards.

In such an election where many voters will pass on the office in question, Schmidt said, there’s an opportunity for a dedicated voting bloc.

“If a particular constituency like younger voters are really energized and really committed to a candidate or a few candidates, you could see a change in the outcome of those elections,” he said.

Joe Corrigan, a Democratic strategist who ran a Council-at-large campaign four years ago, said in an interview it’s likely younger voters will make some waves this spring.

“To me, that means we’re going to see the folks with the most progressive cred, typically younger, typically women, come out on top in these Council races,” Corrigan said.

It could also mean traditional party ward leaders will have less influence.

“I think the youth vote is going to render the party establishment far less potent than it has been in the past,” Corrigan said.

There are five incumbent at-large Democrats on City Council, and incumbents tend to get party backing if they seek re-election.

Political consultant Mustafa Rashed noted that the surge in youth voter turnout has been accompanied by a surge in people deciding to run for office, which could make things more complicated.

“I think we’ll see an overwhelming number of first-time candidates, especially women candidates,” he said. “And it will be a tougher time for incumbents, but this is also an opportunity for them to show what they’ve been doing.”

McIllmurray said Reclaim Philadelphia will review Council candidates and eventually endorse a slate the group will work for in the coming primary. She noted that Reclaim isn’t just seeking votes.

“Part of what we do is build deep relationships in neighborhoods and get people to think about engaging in the political process long term,” she said.

“There are 65 other wards,” Brady said, besides those where progressives have strong influence.

“And I talk to them. They’re good Democrats,” he said. “We’ll probably have some issues in primaries, but we get along.”

Council candidates must file to run by March 13. The primary election is May 21.

We discuss the results from Super Tuesday that have come in so far, what they say about the 2020 democratic electorate, and each candidate’s viable path to the nomination.

After two nights of Democratic debates, we discuss the issues, the policies, the arguments, the memorable moments and what they say about the party and the upcoming primary,

Delaware voters will head to the polls on Thursday instead of the traditional Tuesday to pick candidates for the November ballot.