It was a hot evening last Wednesday when 14-year-old Mekhi Massaquoi jumped into the Schuylkill to cool off at Bartram’s Garden.

Signs along a fence told him not trespass, but did not warn him that swimming was not allowed or that it was dangerous to do so.

Moments after getting into the river, Massaquoi began having trouble, according to the police report. One of the two friends he was with, 15-year-old Quadir Beverly, jumped to rescue him. The third teen called 911. It was around 7:15 p.m. Three hours later, the police recovered the bodies of both Mekhi and Quadir.

“This has been a devastating loss for all of us at the garden,” said Maitreyi Roy, Bartram’s Garden executive director. Roy knew both of the young students from their visits to the garden.

Quadir, who was hours away from graduating from 8th grade at Mitchell Elementary School in Southwest Philadelphia, volunteered regularly at the garden.

“He helped with all of the smaller children that may need attention or some assistance during our programs,” Roy said. “He would always be the one to help out. He was seen by other, younger children in the community as a leader.” 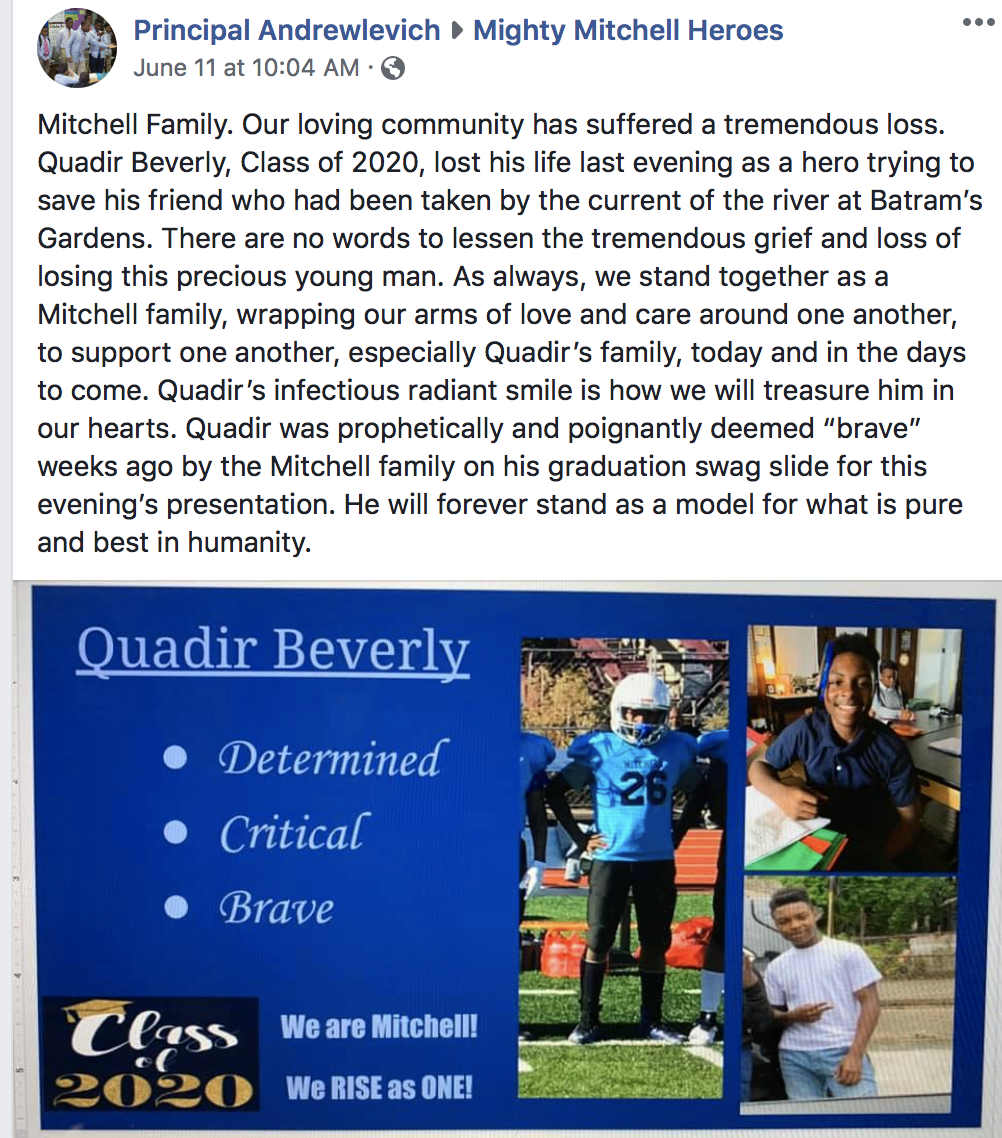 Roy said safety is a constant topic at the garden, especially when water comes up. Bartram’s staff promotes river safety in regular paddling and fishing programs, suspended this summer because of COVID, she said.

But the water can be seductive, especially to young people who may not understand how strong river currents can be. Eighteen people have drowned in the city’s waterways since 2015, as a result of an accident or a suicide, according to data from the Philadelphia Police Department Research and Analysis Unit. At least eight of them, including Mekhi and Quadir, drowned in rivers or creeks, according to the Health Department’s Medical Examiners Officers.

With a hot summer coming and public pools closed because of budget cuts, Roy and others fear more people than ever will seek relief in natural waterways without realizing the dangers that lurk there. In the wake of the tragic loss of life at Bartram’s, they are calling on the city to invest in new signage explicitly warning people of the deadly risk that comes with a jump in.

“There have been a lot of community voices that have asked for more specific signage around preventing swimming,” Roy said.

One of those voices is West Philadelphia Councilmember Jamie Gauthier, herself a mother raising two sons in the district.

“I am calling on you to order that more warning signage be installed at all public access points along the Schuylkill River south of the Fairmount Dam. I hope you will call for immediate action, and I look forward to hearing back from the Administration expeditiously on this request,” the letter sent on June 11 read.

Gauthier, who previously served as the executive director of the Fairmount Park Conservancy, knows the city’s parks well — and understands the risks that come with their waterfronts.

“Unfortunately with the Schuylkill, like many of our rivers, it can look calm at the surface and you can be kind of fooled into not immediately realizing what a strong undercurrent there is,” she said.

Why swimming in Philly rivers, creeks and streams is dangerous

Swimming and bathing in rivers, streams, and waterways in Philadelphia is not permitted under city ordinance. Both the Delaware River and the Schuylkill are tidal rivers, with strong undercurrents, and, at least around the city’s perimers, their water is too dirty for swimming or fishing. The Clean Water Act helped clean a lot of the heavy industrial pollutants sent to our waterways before the 1970s, but experts say there’s still cause for concern. Submerged objects and trash increase the risks of getting injured. And then, there’s poop.

“A lot of the area around Philadelphia, there are combined sewer overflows. Bacteria levels in the river can be very high and we don’t recommend swimming,” said Kate Schmidt, spokesperson for the Delaware River Basin Commission, who does not recommend even water-skiing in the river.

Maita Soukup, a representative with Parks & Recreation, said that while there is signage across the city’s park system “where installation is feasible,” the city is working to increase awareness and education about the dangers of swimming in unauthorized areas.

“The City is working on additional signage and fencing, starting with high-risk locations,” she wrote in an email.

Philadelphia officials are also trying to offer alternatives for people to cool down and recreate during this summer. Ninety-one spraygrounds will open across the city starting July 6 and will be staffed at all times as required by COVID-19 guidelines, Soukup said. Parks & Rec is also planning to integrate water games and “cooling resources” at Playstreets locations. The department also intends to expand teen and young adult job opportunities.

But officials realize they won’t be able to engage all young people, and another impact of this summer’s pool closures is the loss of free or low-cost swimming lessons for thousands of kids, Soukup said.

That, too, is a painful loss, Gauthier said.

The safest bet for swimming, Gauthier said, is to only take a dip when you see a lifeguard on duty. And for now, all Philly waterways are off-boundaries.

“And so we need to warn people, we need to educate people,” said Gauthier.

The Valiants of Philadelphia, a fraternal society of Black and Latino firefighters in Pennsylvania, helped organize the safety effort.

After a record-setting year for the number of people murdered, Philadelphia police officials said the city is still on a similar course in 2022.

Officials say there is no word on the size of the break at this time.