This story originally appeared on PlanPhilly.

In cities such as Boston, New York, and San Francisco, affordable housing is increasingly scarce. Across the United States, most lower-income households spend more than half of what they make each month on housing costs, according to “The State of the Nation’s Housing 2018,” a report from Harvard University’s Joint Center for Housing Studies.

But in Philadelphia, it’s not just a shortage of affordable housing that’s causing the crunch. Instead, poor-quality houses and an unusually high poverty rate — about 400,000 Philadelphians are living in poverty — tilt the equation so that demand far outstrips supply here, making affordable homes hard to obtain and difficult to manage.

To the uninitiated, the data in the Joint Center for Housing Studies’ annual report, released in June, might seem alarming. Among other statistics, the report states that affordable units for low-income renters both nationwide and in the 11-county Philadelphia-Camden-Wilmington region have become 50 percent more scarce over the last 10 years. The data point to a regional deficit of 117,132 affordable rentals. 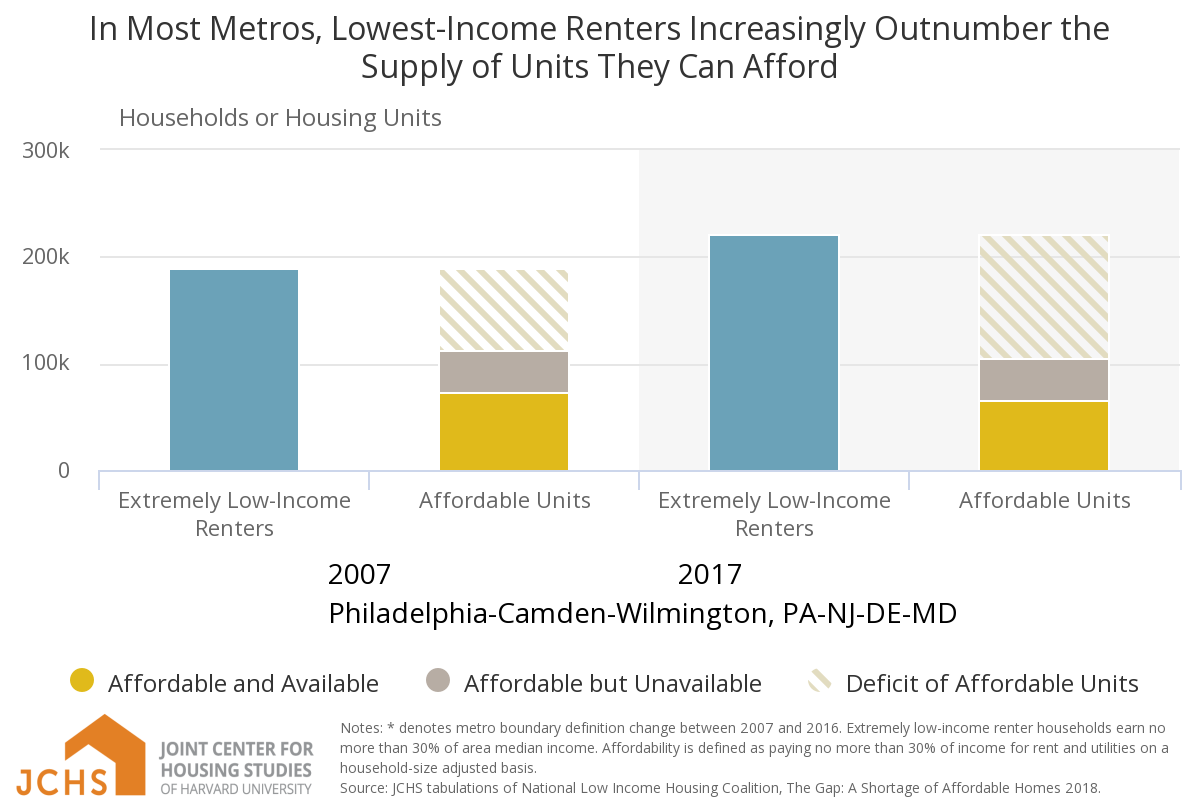 At the same time, overall for-sale housing inventory in the region — as measured by a standard called months of supply— has dropped to 2.6 months, a historic all-time low, according to the report and data from real estate firm Houwzer LLC. Six months’ supply is considered balanced.

This hot seller’s market has contributed to higher prices. Home values in the city of Philadelphia alone have jumped more than 11 percent in the last year, to a median of just above $147,000, according to real estate search engine Zillow. 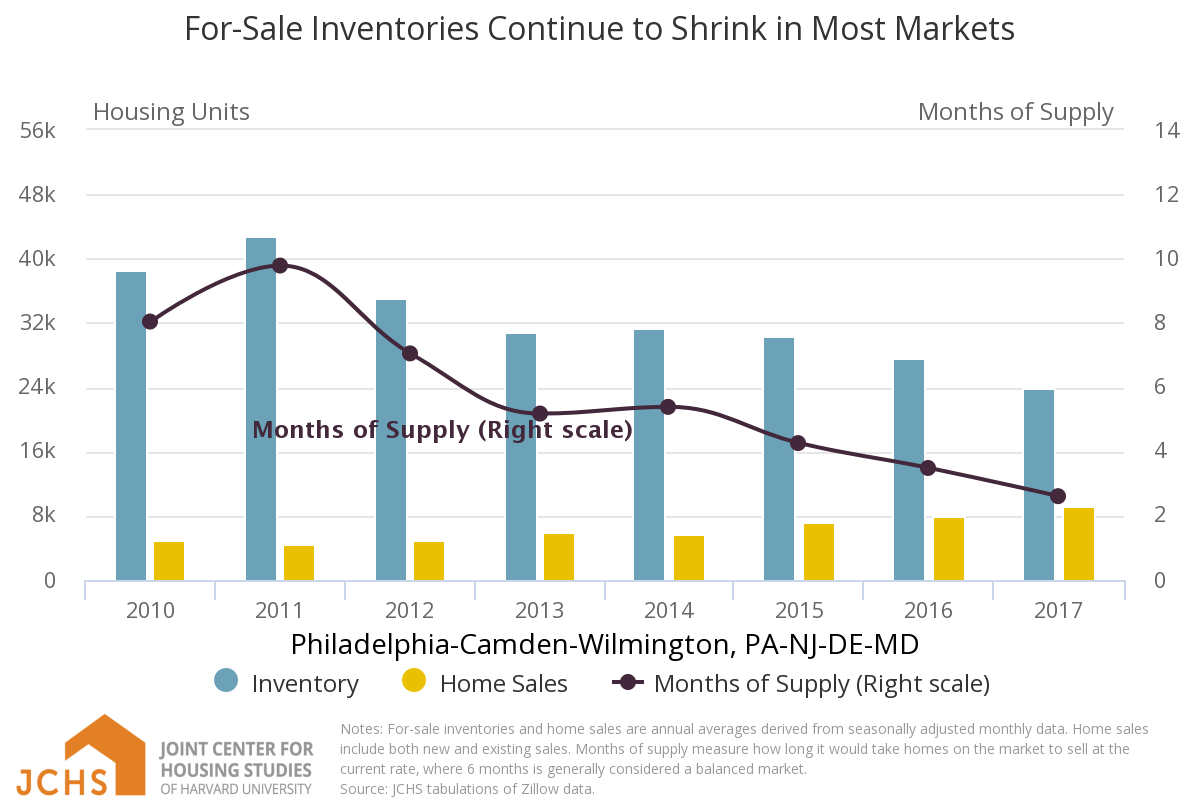 Observers intimately acquainted with the local housing market were quick to alleviate concerns the data in the Joint Center’s report might raise. (Most of the data break down only by the 11-county Philadelphia region, not for Philadelphia County specifically.)

Philadelphia is the most affordable city in the Northeast Corridor aside from Baltimore, said Kevin Gillen, a housing expert and economist at Drexel University’s Lindy Institute for Urban Innovation.

For housing to be considered affordable, the level of household income going toward costs such as mortgage payments, utilities, maintenance, and property taxes should be less than 35 percent, Gillen said. In Philadelphia, that figure hovers around 34 percent, just below the moderately unaffordable cut-off. For context, San Francisco and New York are in the 50 to 60 percent, or severely unaffordable, bracket.

How can Philadelphia be so affordable at the same time affordable housing is so scarce in the city?

“There are a large number of relatively affordable neighborhoods across the city… [but] we have a lot of housing that’s not affordable to a lot of poor people because they are in poverty,” said Alan Greenberger, the city’s former deputy mayor and a housing-policy expert at Drexel’s Lindy Institute.

Philadelphia’s poverty rate is 25.7 percent, the highest among the 10 largest U.S. cities, according to the Pew Charitable Trusts. The Joint Center for Housing Studies report defines extremely low-income renters as those making less than 30 percent of the area median income, which is about $26,000 a year in Philadelphia, slightly above the federal poverty line (which is just under $20,000 a year for a family of four). To be considered affordable for extremely low-income Philadelphians, then, average monthly rent should be about or below $650 per month. 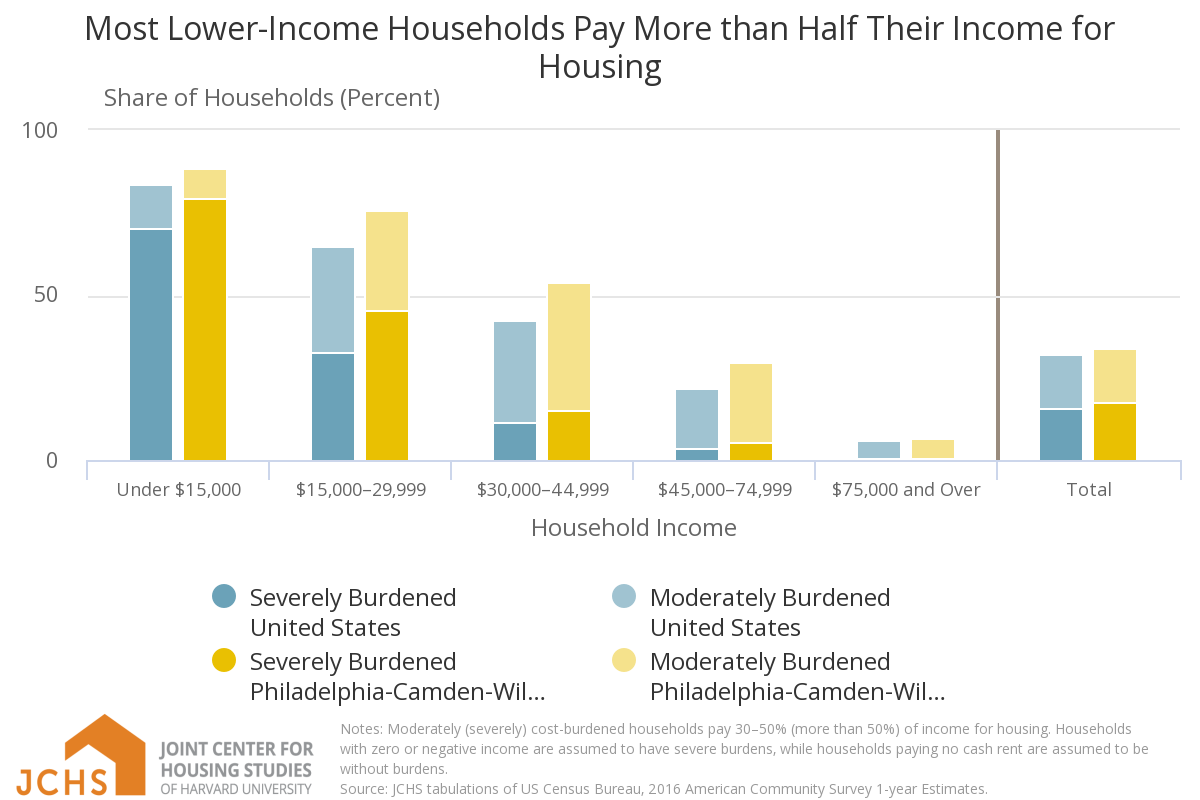 Though his statement about unaffordability and poverty may sound like a semantic distinction, Greenberger argued that high poverty makes the problems here different from those of metropolitan areas like New York and Boston.

Timothy Henkel, senior vice president of Pennrose Properties, one of the few private-sector affordable-housing developers active in the Philadelphia market, agreed with Greenberger’s conclusion. High poverty rates are driving changes in the affordable-housing equation across the country, but Philadelphia is feeling the squeeze more acutely than most, Henkel said.

Prospective homeowners need to take into account their savings and credit scores when considering a purchase. Without financial counseling, would-be buyers are often unaware of the types of homes they can reasonably afford, said Maureen Keown, a spokeswoman for the Philadelphia-based nonprofit financial-counseling service Clarifi. Some of the more affordable neighborhoods in the city include Grays Ferry and Port Richmond; Mount Airy, Graduate Hospital, and Fishtown are in the more middle-cost housing range.

The city’s elderly housing stock exacerbates the unaffordability caused by poverty, Gillen said. The median age of a house in Philadelphia is 93 years old — nearly thirty years older than the average median home age across the country, according to data compiled by the National Trust’s Preservation Green Lab. (The median is the middle number; half the houses are older, half newer.) So even if Philadelphians can afford homes, their quality is frequently substandard because the city’s housing stock is old and depreciated, Gillen said. 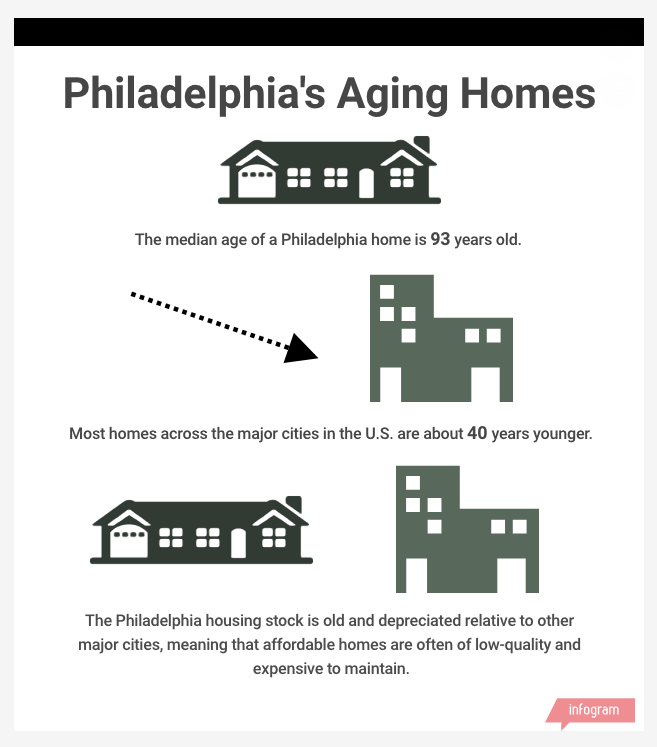 Many Philadelphia rowhouses were constructed as worker housing and were not intended to last for more than 100 years, Greenberger said — they need new boilers and electric systems, replacement for cornices that have fallen off, insulation, paint jobs, and other repairs.

Such properties are “naturally occurring affordable housing,” Henkel said, because they are privately held and affordable without income or deed restrictions. They need expensive repairs, and “there’s no math that makes sense… to take out a loan… and then turn around and rent [a unit] on the same level,” he said.

“We need to make reinvestments in these properties,” Greenberger said.

The cost of improving and reinvesting in old houses can lead to gentrification and displacement, however. Landlords face pressure either to raise rents or allow homes to continue their decline, Henkel said.

There are policy solutions that can ease the burden of gentrification, improve housing quality, and increase the rate of affordable-housing construction, Greenberger said.

But he added, “We probably need to do a better job as a city to make people aware of those programs.”

Among such initiatives are the Longtime Owner Occupants Program (LOOP) and the Real Estate Tax Deferral Program, according to information provided by Paul Chrystie, deputy director of communications for city’s Department of Planning and Development. Such programs allow homeowners without cash on hand to wait until they can receive the benefits of their property’s higher value before paying the necessary taxes, Greenberger said.

For example, under the Real Estate Tax Deferral Program, if the value of a homeowner’s property increases by more than 15 percent in a year, that homeowner may be able to postpone payment of taxes on the excess amount until the home is sold.

LOOP is an income-based real estate tax abatement for residents who have owned their homes for more than 10 years. If a property’s value increases more than 300 percent in a year, the homeowner may be eligible for the tax abatement, according to the information provided by Chrystie.

To help with housing quality, the city also has a Basic Systems Repair Program, Greenberger said. Under the program, homeowners with a maximum annual income of $37,650 for a family of four are eligible for free boiler and heating repairs, as well as roof replacement in some cases of major interior damage. 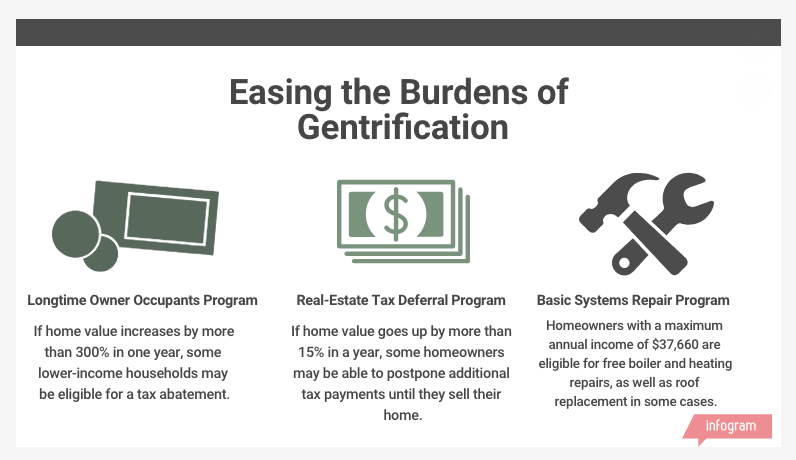 Renters are in a more precarious position, Gillen said. Without help from the city and state, it’s much more difficult for renters to avoid the effects of rising property values, Greenberger noted.

That’s where private-sector affordable-housing developers like Pennrose come in: They can build new units to meet the demand, if they take advantage of incentives provided by the state.

Those incentives include 4 percent and 9 percent tax-credit deals, Greenberger said. While 4 percent tax credits are common, they often do not provide enough revenue to be lucrative for private-sector developers. Nine percent deals are more useful but less common, he said. The tax credits allow developers to reduce their federal taxes once affordable units are put into service, and the developers can market the credits to investors, according to the Pennsylvania Housing Finance Agency.

Zoning bonuses that encourage developers to allocate certain percentages of their projects to affordable housing are also often successful, but “these zoning bonuses tend to exist downtown… and produce small numbers of units,” Greenberger said.

For private-sector developers, “there are some barriers to entry, some of them real, some of them perceived,” Henkel said, calling Philadelphia a “high-cost environment” with construction costs that can often scare off developers.

Pennsylvania’s state government has done a lot in recent years to create resources for developers, including some increased funding of affordable-housing projects, but that has not meant a dramatic uptick in new players in the Philadelphia market, Henkel said.

“The state is doing better, but there haven’t been huge commitments to gap-fund new construction projects,” he said. “It’s just clearly not viewed as fertile ground.”

At the same time, Henkel is excited about the city’s future. Philadelphia has worked to create overlay zoning that allows upzoning with affordable housing, which creates more inclusionary projects. “Those will increase affordable-housing supply, and it will also increase it in places that might not have gotten any at all,” he said.

A hub of affordable housing, public green space, and a nonprofit justice center will spring up over several blocks in Chinatown in the coming years, pending approval of a project proposed by Pennrose. The affordable housing and justice center were included thanks to the city’s recent efforts to include social-impact criteria in the Philadelphia Redevelopment Authority’s requests for proposals, which give points to projects that meet those criteria, Henkel said.

“This was the first RFP where we included in our scoring a factor called social impact… and that means the developer has to give us a narrative where they explain what is the project’s social impact,” said Gregory Heller, who leads the Redevelopment Authority.

The Chinatown proposal was selected about a year ago, and Henkel said it could be approved by the Redevelopment Authority in the fall. Pennrose has hosted community meetings to discuss the finer details, and another meeting is scheduled for August.

The project, at 800-30 Vine St., is a small light in a dim sky, though — it exemplifies the mixed-use, community-focused affordable-housing mentality Henkel espouses, but it will offer just 55 to 65 units of senior affordable housing. It also will offer 160 rental units that are not designated affordable housing and are expected to rent between $1,500 and $2,200 a month.

A number of other planned developments offer similar numbers of units. The city will soon be cutting the ribbon for two new affordable-housing projects— Anthony Wayne Phase III and Centennial Village, Heller said. The projects will provide between 45 and 60 affordable units apiece; the wait list for a unit in Centennial Village is more than three years long.

Last year, the state awarded tax credits to developers for eight different projects across Philadelphia, but those will create only 475 additional units total in a region that, according to the JCHS report, requires an additional 116,000-plus.

The Redevelopment Authority, the Philadelphia Land Bank, and other city development organizations are trying to be conscious of affordable-housing needs when evaluating future development projects, Heller said.

The heralded program is currently set to expire at the end of the year. A bill moving through the City Council would change that.

“We wanted this project to feel like Frankford, to be about Frankford, and be for Frankford,” said City Councilmember Maria Quiñones-Sanchez.

Launched in 2019, the Restore Repair Renew program offers low-interest loans to homeowners who need to make major fixes to their properties.