When Carol Collier checked the rain gauge in her garden on Tuesday after Tropical Storm Isaias ripped through the Philadelphia region, she was shocked by what she saw.

“It was over 5 inches, and the water was swirling around, so I think it was more than that,” she said.

She lives by a small pond in Ambler. “It was overflowing the spillway and the walls; it was just a huge amount of water coming through.”

Collier is the senior adviser for watershed management and policy at the Academy of Natural Sciences of Drexel University, and she spent 15 years as the executive director of the Delaware River Basin Commission. She continually checks flow rates of the region’s rivers and streams.

“The Wissahickon Creek was flowing over 3,000 cubic feet per second at Fort Washington,” she said.

The Wissahickon flows into the Schuylkill River about 12 miles south of Fort Washington.

“Three thousand cubic feet per second is what you would expect in the Delaware River at Trenton at low flow,” Collier said. “That’s the little Wissahickon Creek flowing like that, so that’s a lot of water headed downstream. We’re lucky that the rivers were at a lower stage than they might be normally, so we lucked out.”

Collier said she’s seeing an increase in storm intensities which, combined with this summer’s heat waves and the mild winter, point to impacts of climate change.

And although Collier said you can’t necessarily attribute one particular storm like Isaias to climate change, a warming Earth does make storms more intense and bring more rainfall.

“You need to consider it as an overlay to all the things you might likely expect, but it intensifies the problems,” she said. “And it increases the extremes, so I think it’s safe to say we should be prepared for more floods, and even more droughts on the flip side of that.”

A new field of climate science, known as attribution science, does examine how a warming atmosphere plays a part in individual weather events.

Sean Sublette, a meteorologist with Princeton-based climate research organization Climate Central, said attribution science first looks at the weather for a particular region over its entire known record, and then runs models using known atmospheric information prior to the rise in greenhouse-gas emissions. It compares those to models run incorporating greenhouse-gas emission increases.

“And you run those multiple, multiple, multiple times,” said Sublette. “And you start to say, `Can I regenerate any of these things mathematically?’ And you cross-reference with actual observations, so you’re not just hanging your hat on a big computer simulation.”

He said the models show rain tends to be 5% to 10% heavier. And that trend is expected to continue, especially if carbon emissions are not brought under control. 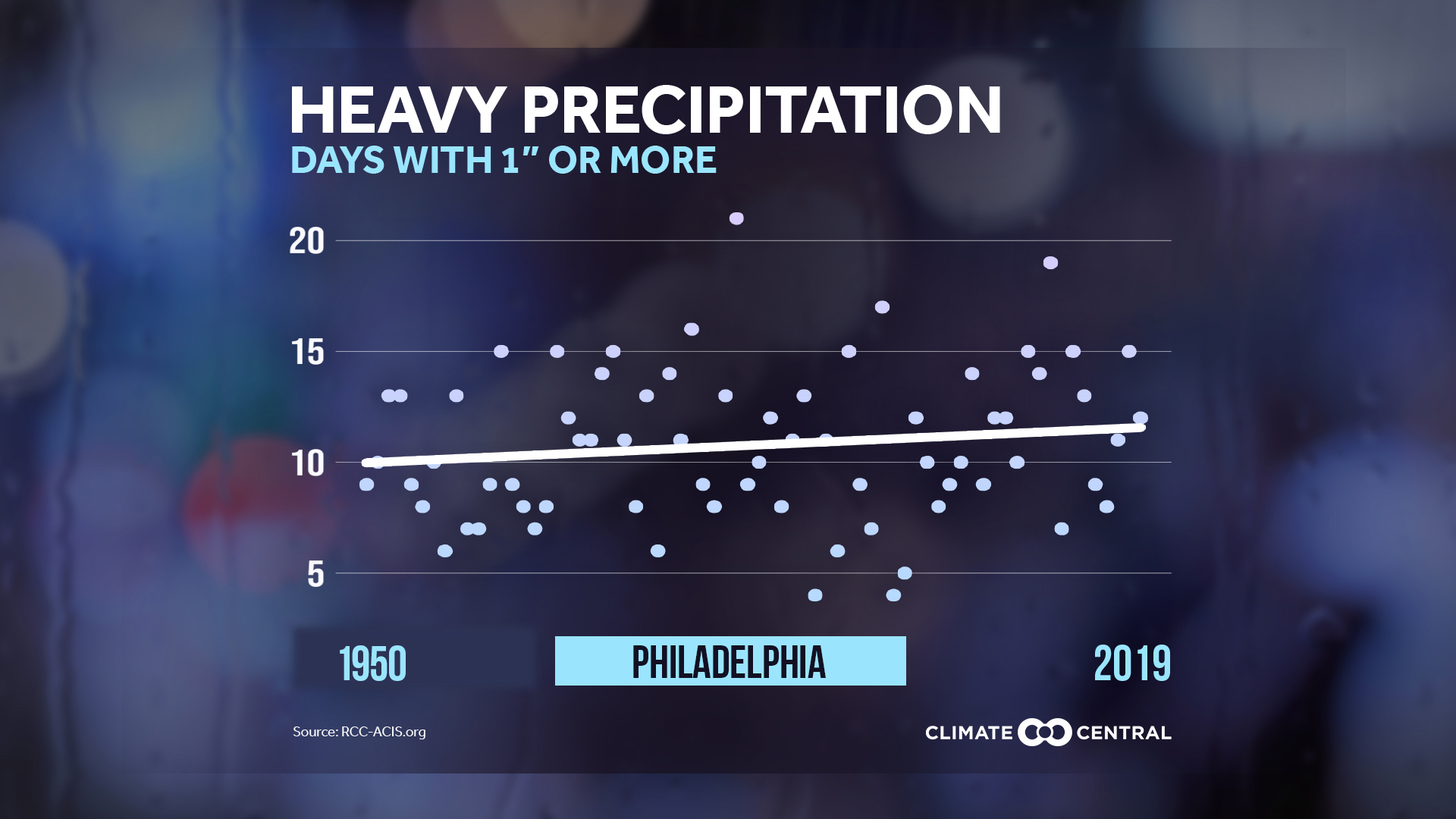 “It’s kind of like loading the dice: At any one time, your odds of rolling a five or seven or 11 are a certain way, but you can tweak the dice a little bit, and suddenly you’re rolling more sevens,” he said. “So what we’re doing is fixing the dice, weighting the dice a certain way so that a very high impact event becomes more likely.”

Tropical Storm Isaias flooded large and small streams in the Delaware River Watershed, forcing the Schuylkill River to crest at a record-breaking 13.25 inches, which had not happened since 1971. The highest recorded crest of the Schuylkill was 17 inches in 1869, and that was before urbanization paved over the land, leading to more stormwater running off impervious surfaces and swelling creeks and rivers.

Sublette said the warming atmosphere does make it more likely that storms like Isaias will bring heavier rain. And that has implications for those homeowners and business owners now cleaning up from the recent floods.

“So if you have a mortgage, a 30-year mortgage, you need to factor that into your equation, what kind of property do I want to be settling in on,” said Sublette. 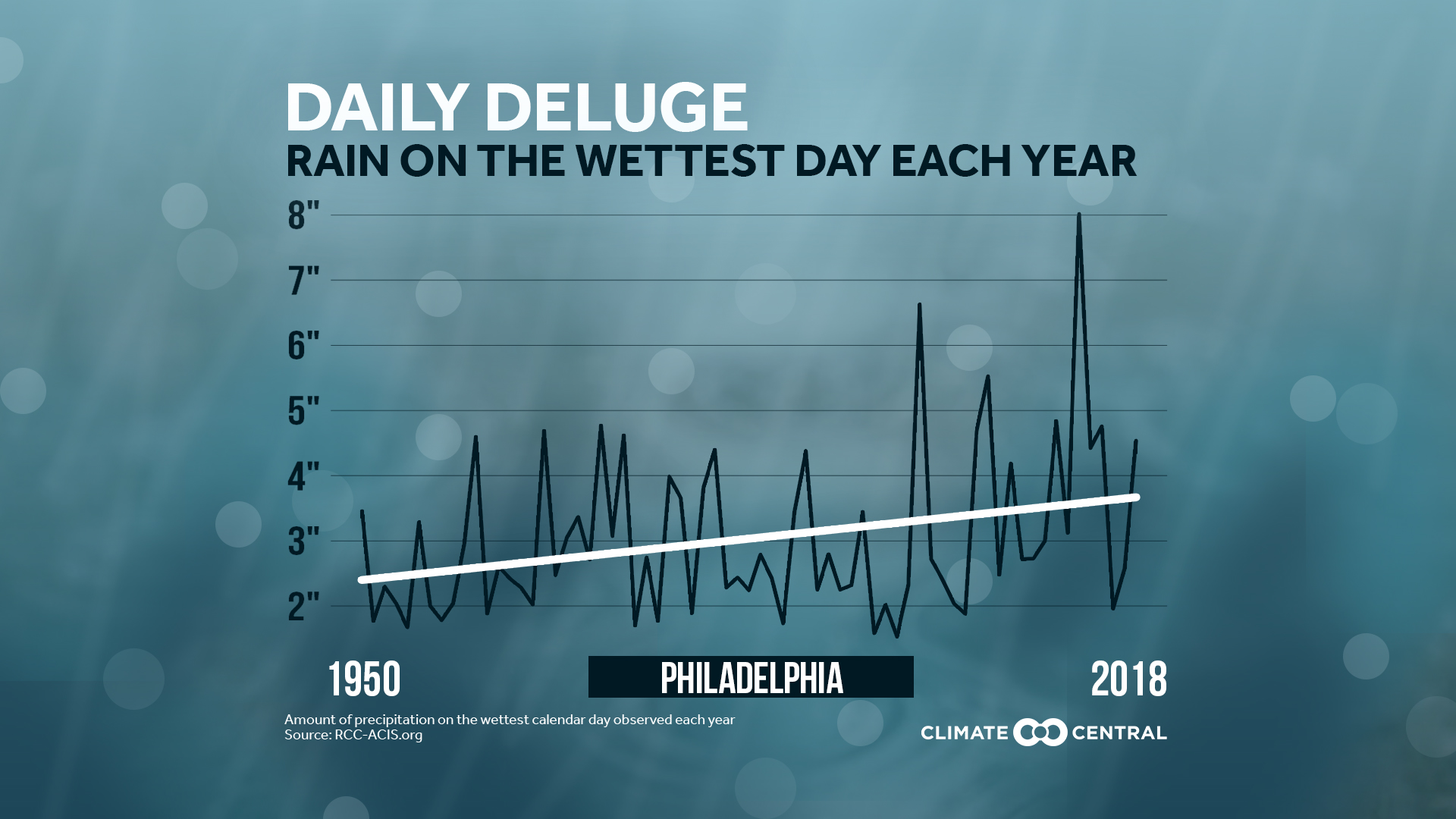 Collier said we need to adapt our land use and planning to make way for future floods.

“Do we try to buy out those properties or raise houses?” she said.  “How do we plan better for areas newly in harm’s way? Maybe they shouldn’t be zoned for residential use.”

The country, and the international community, also need to figure out how to stop using carbon-intensive energy to heat homes and power cars, she said.

“We as a country really need to figure out our energy use. Because unless we minimize the greenhouse gases … we are not going to be able to rid ourselves of these environmental problems, the floods, the heatwaves,” Collier said. “It really gets to how we use energy, what sources of energy we use.”

Under the proposal, a land swap, residents would get to stay in Eastwick. It avoids the limitations and red tape of federal programs, supporters say.

There is a flash flood watch for Philadelphia, Trenton, Wilmington, and all of southeastern Pennsylvania through tonight.

Eastbound lanes of the Vine Street Expressway are back open, work continues on westbound lanes

Thousands of gallons of water were being pumped each minute from the highway in Center City.