A growing body of social and scientific research aims to establish a connection between declining economic conditions and poor health outcomes. A new study out of the University of Pennsylvania adds more to that idea. The research, published in JAMA Internal Medicine, found that rates of opioid overdose deaths increased in U.S. counties in the industrial Midwest and South after auto plants there closed. The study’s authors said they focused on auto plant closure because they indicate both cultural and economic changes in a community.

“For a long time, automotive jobs were a pathway to the middle class,” said lead author Atheendar Venkataramani, Associate Professor of health policy and medicine at Penn’s Perelman School of Medicine. “So a large auto plant closure effectively not only destroys the economy of a local area, but it also has implications for how the fabric of society is able to maintain itself,” he said.

While much of the research on the opioid epidemic has examined the influence of supply-side variables—like the proliferation of prescription pain medications like OxyContin, and the increased availability of illicit opioids like fentanyl—there is less research on the demand for opioids as a function of economic drivers, according to the authors.

So, the researchers looked at 112 “manufacturing counties” in the industrial Midwest and South, defined by being among the top 20% nationwide for share of workers employed in manufacturing. Between 1999 and 2016, 29 of those counties saw auto plants close. The researchers tracked the overdose death rates during the five years after the plants closed, and used the counties where plants stayed open to help predict what the overdose rates would have been had the plant not closed. They found that overdose mortality rates were 85% higher than researchers would have predicted had the plant stayed open. The demographic group with the greatest increase in deaths was white men ages 18-34. 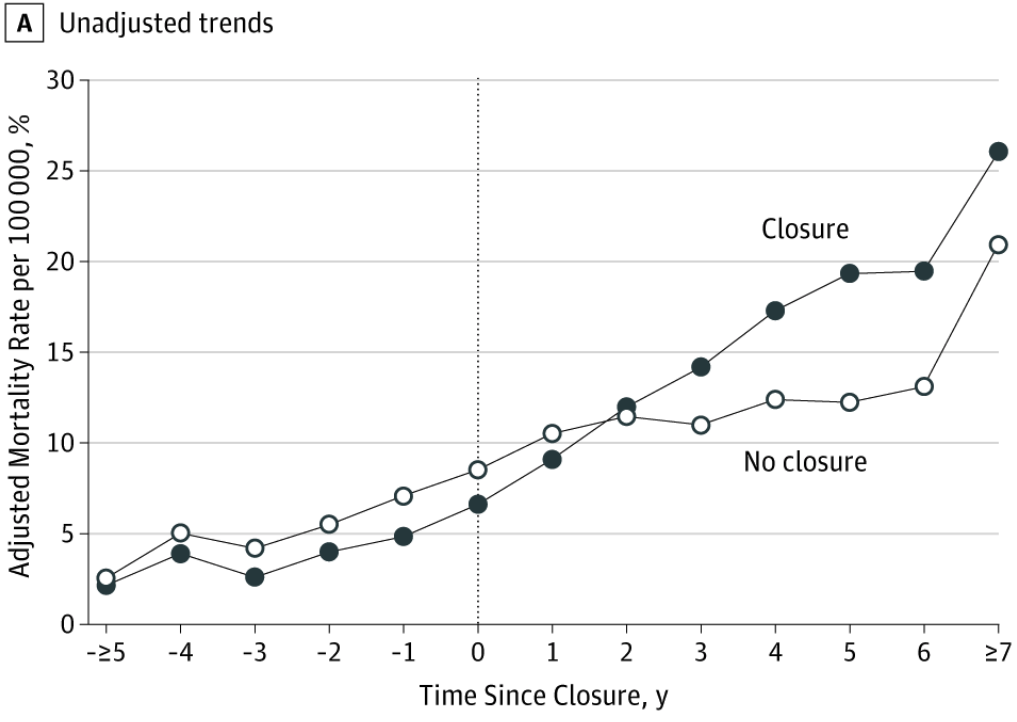 The study’s authors acknowledged that no observational research can prove causation, but they designed the research to control for that as much as possible. For example, they were concerned that because the places experiencing plant closures were already experiencing economic decline, the increase in overdose deaths could be a function of a job market that was already slumping, not necessarily a result of the factory closing. But the trends in opioid overdose deaths before the plant closures look very similar to those counties where plants did not close.

“Where you see them diverge is timed exactly with when the closures happened,” said  Venkataramani, adding that the timing gave him and his co-authors confidence that the spike in overdose deaths was a direct effect of the plant closure.

The researchers didn’t look at how exactly plant closures would lead to more opioid use. While they did break down the overdose deaths demographically, they have no way of knowing if those dying of drug overdoses were former employees at the plants, aspiring workers who’d lost hope, or family members affected by a loss of income.

The only Pennsylvania factory used in the study was the Mack plant in Macungie, which remains open. But Venkataramani said that in places like Philadelphia, where a loss of manufacturing jobs has had a dramatic effect on communities, practitioners should take note. “As we go through our medical practice, and the way we design health policy, we should be mindful of the fact that where there are places facing sustained economic challenges,”  he said. “There’s a myriad of conditions that might develop that we need to surveil and intervene early [on] so that we don’t have to have a situation where a sustained bad economy means bad health.”

We'll talk about the ever-changing, impossible body image standards for men and women of all ages, and how we can feel more confident about ourselves and the way we look.

Study: Philadelphians with opioid use disorder remained on treatment longer during pandemic

Drexel University researchers call for reduced prescribing restrictions to persist after study finds people with opioid use disorder more likely to stay on their treatment.