The nation has been mourning the loss of Sen. John McCain this week, leading up to funeral services this weekend at Washington’s National Cathedral and his burial at the U.S. Naval Academy, where he was a member of the Class of 1958.

We are fast approaching Labor Day weekend. That makes it a good time to check in on Americans’ views of labor unions these days. Although few Americans are members of unions, six in 10 still approve of labor unions, not down that much from when Gallup first asked about unions back in 1936, one of the first questions Gallup ever asked: 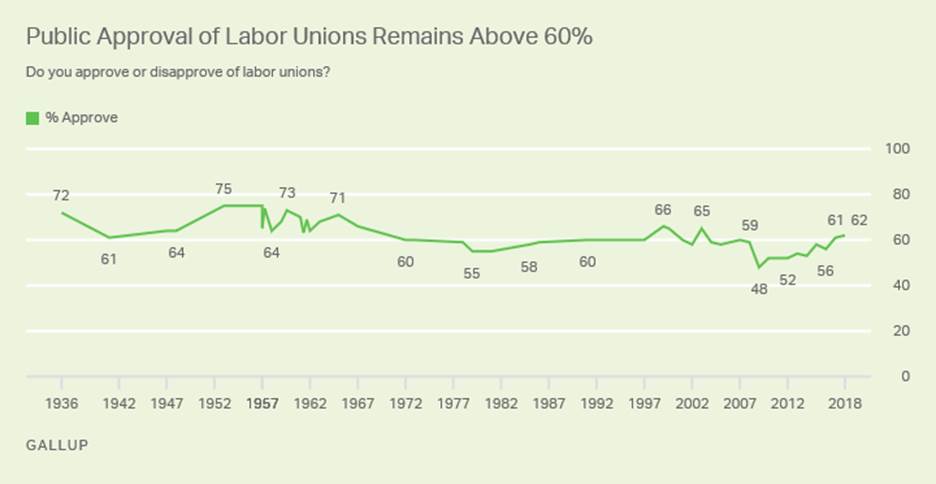 There are two competing narratives about worker satisfaction these days. One is that workers should be upbeat and positive given the low unemployment rate and strong economy. The other is that workers should be downbeat because A) they see artificial intelligence on the horizon and realize they will be out of a job in the future, and B) their wages are not improving or keeping up with inflation.

The data show that we don’t see any signs of the concerns. On a trend basis, workers are more satisfied than they have been, and their satisfaction with their pay and their fear of being laid off are trending more positive rather than more negative.

Listen to the audio above to hear the full conversation.

Do Americans run on organic and gluten-free? Not as much as you may think