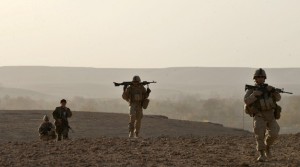 The Obama administration recently released its Afghanistan war policy review, saying that the U.S. is making “considerable gains toward our military objective.” The war in Afghanistan is the longest running war in U.S. history and is becoming increasingly unpopular.  A recent ABC News/Washington Post poll found that 60% of Americans think that the war has not been “worth fighting.”  This hour, Philadelphia Inquirer Worldview columnist TRUDY RUBIN comes in to talk about the progress in the war and what she saw on her recent visit there.  Rubin has just returned from Afghanistan where she traveled with Admiral Mike Mullen, chairman of the Joint Chiefs of Staff, and visited U.S. bases in Helmand province and Kandahar.   She was also in Pakistan and Iraq.

Russian bounties for US troops in Afghanistan

How should the U.S. respond to reports that Russia paid bounties to Taliban militants to kill U.S. soldiers in Afghanistan?