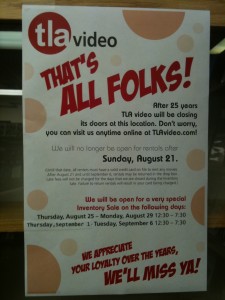 TLA video’s last Center City movie rental store is closing this week. 1520 Locust St follows several closings of stores of the TLA franchise– at its height there were seven retail stores, including one in New York City. (The Bryn Mawr site has another year on its lease.) TLA Entertainment will still rent foreign films and gay and lesbian feature, cult and art titles online, but the reliable, neighborhood, brick-and-mortar rental store, staffed by knowledgeable and opinionated film-school students, will be gone, as of this Sunday, 8/21. Our guest, RAYMOND MURRAY, President of TLA Entertainment, who started as a projectionist in 1972, says film sales are going to VOD (Video On Demand) and he’ll continue with their online presence and act as a film festival curator. Filmmaker and writer JOHN WATERS will join us to discuss how instrumental the Theater of the Living Arts Cinema was in launching his career, with screening his controversial 1972 film, “Pink Flamingos,” when Al Malmfelt ran the theater at 334 South St. CLAIRE KOHLER, Chief Operating Officer of TLA Entertainment and former usher, will also join us to help tell the story of how she, Murray, and other TLA staffers bought the cinema in 1981 to continue its reputation as one of the country’s leading repertory art cinemas.  The Theater of the Living Arts began as an avant-garde theater in the mid/late 60s, with actor Andre Gregory as artistic director for a couple of those years. Some of the innovative troupe members were Morgan Freeman, Danny DeVito and Judd Hirsch. The TLA Cinema’s programming of double features, matinees and midnight screenings introduced audiences to many non-mainstream films including “The King of Hearts,” “Harold and Maude,” “I Am a Dancer”; ‘Porno Chic’ features; and the weekly screening of “The Rocky Horror Picture Show,” complete with stage dancers and thrown toast, for over 15 years.