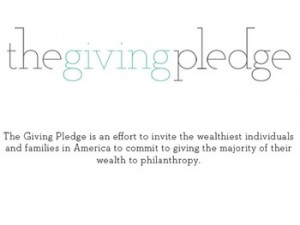 America’s wealthiest citizens are on a giving binge. First, Bill and Melinda Gates and Warren Buffett pledged to give away at least half their wealth to charity. Then a few weeks ago, they announced that 40 wealthy families and individuals have joined them and signed their “Giving Pledge.” Philadelphians weren’t surprised to see one of their own on the list: H.F. ‘GERRY’ LENFEST made his millions pioneering cable television in Philadelphia’s suburbs, and, along with his wife, has given away more than $800 million to local and national causes and charities. Marty will talk to him about his philanthropy, and why he signed the pledge. We’ll also hear from SEAN STANNARD-STOCKTON, a philanthropy consultant and columnist for The Chronicle of Philanthropy, about the Giving Pledge and modern philanthropy. Finally, we’ll hear from government reformer, presidential candidate and author RALPH NADER, whose novel last year, Only the Super-Rich Can Save Us!, he called a ‘practical utopia’ in which the world’s richest people banded together to solve the biggest problems.