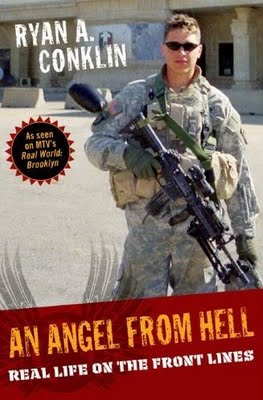 Many young veterans and members of the Individual Ready Reserve have gotten the dreaded call ordering them back to war. But RYAN A. CONKLIN of Gettysburg is the only one to have that moment filmed and broadcast to millions by MTV. When Ryan, then 23 years old, got that call in 2008, he was being filmed around-the-clock as a cast member on MTV’s The Real World: Brooklyn, their first cast member who had seen war. MTV followed Ryan’s 2nd tour in Iraq for a critically praised special, Return to Duty. Since returning home, Ryan has become active with the Iraq and Afghanistan Veterans of America and has written a new book, An Angel From Hell: Real Life on the Front Lines. On today’s Radio Times, Marty will talk with Ryan about life under fire and before the cameras. And then we’ll talk to Ryan’s mom, Pat Conklin, about what it was like to send Ryan off to war, and now her younger son, too.