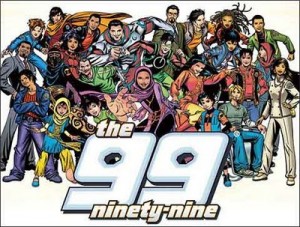 “THE 99” are a new breed of super heroes dreamed up by Kuwaiti-born psychologist Dr. NAIF AL-MUTAWA. Based on the 99 universal human values exemplified by Allah and rooted in Islamic history and culture, “THE 99” are Al-Mutawa’s attempt to provide Muslim children like his own with better heroes than suicide bombers. Dr. Al-Nutawa’s heroes made their debut in comic book form, and are set to be broadcast as a computer-animated cartoon in several countries starting next year. But his attempt has met with controversy in the Muslim world, where the Saudi censors initially denied the comics permission to be published, and more recently in the United States, where opponents of Islam pressured a U.S. TV station to postpone, at least, broadcasting the cartoon on TV. Dr. Al-Nutawa’s quest to bring The 99 into the world, and into the imaginations of the world’s Muslim youth, is featured in a new PBS Independent Lens documentary set to premiere on WHYY on October 13th, called “Wham! Bam! Islam!,” and screening tonight here at WHYY.