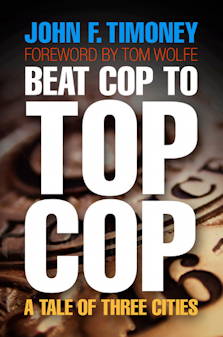 JOHN F. TIMONEY is well known to Philadelphia listeners as the former police commissioner who helped then-Mayor Ed Rendell turn the city around. Before the Irish-born Timoney came to the city of Brotherly Love, he rose through the ranks of the New York City Police Department, helping Mayor Rudy Giuliani and NYPD Commissioner Bill Bratton overhaul the Big Apple’s law enforcement policies and practices. And in 2003, he left Philadelphia for the warmer climes of Miami, leading that city’s fight against crime AND corruption as police chief of Miami through his retirement in January. Guest host TRACEY MATISAK talks to Timoney about his new book, whose title says it all: Beat Cop to Top Cop.

The Department of Justice has loaned the NIBIN Mobile Unit to Philadelphia for at least three months.

All four officers are charged for their failure to provide Floyd with medical care. Chauvin was also charged in a second indictment, stemming from the arrest of a 14-year-old.