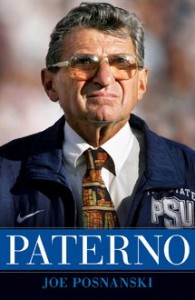 When acclaimed sportswriter JOE POSNANSKI set out, in early 2011, to write the definitive biography of Penn State football coaching legend Joe Paterno, he had no idea what he was in for. Months later, a grand jury would indict Paterno’s longtime defensive coordinator, Jerry Sandusky, for a slew of child sexual abuse charges, for which Sandusky was convicted this summer. When the scandal hit the news in November 2011 with the indictment of Sandusky and two top Penn State administrators, the furor dominated the national headlines and did what had been unthinkable in Happy Valley: the beloved “Joe Pa” was unceremoniously fired by Penn State’s Board of Trustees, along with President Graham Spanier. Posnanski’s unprecedented access to Paterno during the most tumultuous period of the famed coach’s life, including the last interview before Paterno died in January, yielded a book that’s among the most anticipated of the year. In “Paterno,” Posnanski tries to square what the Sandusky trial and Freeh Report have told us about Paterno’s inactions in the face of allegations and investigations of his longtime assistant coach with the half-century of honorable leadership of the Penn State football program, mentoring thousands of young men and leading the push for Penn State to national prominence as a research university.

Philadelphia has a long history of urban riding clubs. Today, we talk to two riders whose careers in polo were launched in Philly.

The relaxed social distancing restrictions will go into effect March 1, in time for the Phillies season opener at Citizens Bank Park in April.