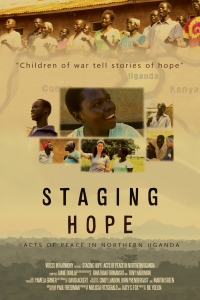 On October 14th, the United States, with the consent of the Government of Uganda, sent about 100 troops and military advisors to northern Uganda for a “short term” to capture or kill the leader and top commanders of the Lord’s Resistance Army (LRA). Joseph Kony, the LRA’s leader, has been terrorizing millions of people in Central Africa for over 20 years and is currently in three African countries: Central African Republic, South Sudan, and Democratic Republic of Congo. Kony’s most visible victims have been young children he and his army have kidnapped and forced into murderous child soldiers, supposedly guided by Kony’s view of the Ten Commandments. We’ll talk to ASHLEY BENNER, a Policy Analyst at the Enough Project, a project of the Center for American Progress to end genocide and crimes against humanity and FRED BEMAK, professor in the College of Education and Human Development at George Mason University and founder of Counselors without Borders, who works closely with the NGO, “Invisible Children,” helping former child soldiers re-enter society. Also joining us will be actress and activist, Philadelphia-born MELISSA FITZGERALD (West Wing, etc.), one of the producers and principals of “Staging Hope: Acts of Peace in Northern Uganda.” She is part of a team of actors, playwrights and activists who help these former soldiers heal through the arts.