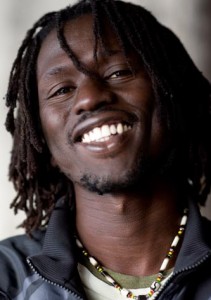 Internationally acclaimed hip-hop artist and peace activist EMMANUEL JAL estimates he was born sometime in the early 1980s in the south of Sudan. At the age of seven, his family was forced repeatedly to flee their small village as Sudan’s civil war moved closer. At this time, Jal was separated from his mother, later learning she had been killed. Acting on the orders of both the Sudan People’s Liberation Army (SPLA) and his father who fought in its ranks, he joined thousands of other children on the treacherous walk from Sudan to Ethiopia to begin his life as a refugee and child soldier. He arrived at Pinyudu refugee camp, where he says “human misery knew no bounds.” It was here he met his good friend, David Nyuol Vincent, received basic schooling and trained to fight. When he was chosen to fight in Sudan’s civil war at the age of nine, he learned to “sleep with one eye open” and endured daily beatings and other cruelties. Jal suffered years of trauma and hardship, witnessing the deaths of friends and family members, toting a gun he could barely carry, and at times teetering on the brink of starvation or suicide. That he survived these years fighting in Ethiopia and Sudan is remarkable. He was eventually rescued from this existence by British aid worker Emma McCune, who smuggled him to Nairobi. Devastated by Emma’s death in a car accident when he was 13, it was another seven years before he started making his music of revolution and redemption. He has since made three albums, but cites his biggest accomplishments as those related to his tireless activism and advocacy. These include his work as a spokesperson for Make Poverty History, the founding of his own charity, Gua Africa, and current campaign, We Want Peace. He is the most famous person from the world’s newest nation, South Sudan, and is its ambassador to the world. He’s now touring the United States visiting schools, colleges and universities as part of his “Lose to Win” challenge. Emmanuel set the challenge in 2009 as a way to help raise funds for Gua Africa. For nearly 2 years he ate one meal a day to raise awareness about the need for education in his home town Leer, in South Sudan, and to raise money to build his own school, Emma Academy, through Gua. This time he is “losing his home” to visit up to 200 schools worldwide. He will be telling his story to young people and encouraging them to see ways in which they can ‘lose’ in order to ‘win’ for the greater good. This time he is also raising money for 2 additional charities, My Start for The Windle Trust, and Africa Yoga Project, charities that support social and emotional learning for young people effected by conflict or poverty in East Africa.

Reporters from Chinese media invited to Philadelphia, ask the Orchestra about U.S-China relations, and what China was like back during their first visit.

Over 10 years, the Fabulous Philadelphians have built strong cultural ties with China. With trade diplomacy hitting a low note, will that good will dissipate?

The sale of a New Jersey music college to a Chinese company has been delayed after the state said it needs more information.