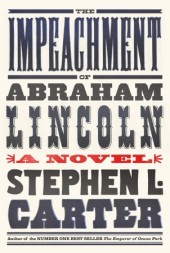 What if President Lincoln hadn’t been killed at Ford’s Theatre? What if John Wilkes Booth failed in his assassination attempt and Lincoln recovered, only to face an impeachment trial?  That’s the premise at the center of  “The Impeachment of Abraham Lincoln,” the latest book from our guest, STEPHEN L. CARTER.  Carter imagines Lincoln embroiled in an impeachment trial and charged with overstepping his constitutional authority during the Civil War.  Though we have come to think of Lincoln as one of our greatest presidents, Carter reminds us Lincoln was despised by many of the leading politicians of the time and tries to recreate the tensions of post-Civil War America.