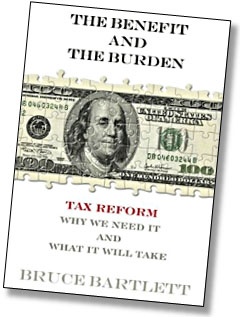 In this year’s Republican primary, tax reform is all the rage. Every candidate has mentioned it and to most Americans it sounds like a great idea. But what does a tax system overhaul really mean and what should it look like? Economist and tax expert BRUCE BARTLETT has ideas about simplifying the tax code which he highlights in his new book, “The Benefit and the Burden: Tax Reform – Why We Need It and What It Will Take.” Bartlett was a senior policy analyst in the Reagan White House, and deputy assistant secretary for economic policy at the Treasury Department during the George H.W. Bush administration. He’s now a columnist for The New York Times’ Economix blog, for The Fiscal Times and for Tax Notes magazine. He’s our guest on Radio Times.