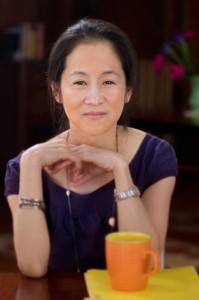 Novelist JULIE OTSUKA didn’t dream of being a writer. She pursued fine art at Yale and Columbia Universities, and it wasn’t until she was 30 that she put her paint brush down and concentrated on words as her medium of expression. Her first novel, “When the Emperor Was Divine,” published in 2002, about Japanese Americans interned during WW11, was received and helped her earn a 2004 Guggenheim fellowship in Creative Arts/Fiction. Otsuka makes up her stories, but has rich family history to draw upon – she grew up in California, raised by a family who endured one of those internment camps. Her latest book is “The Buddha in the Attic,” about young, early 20th century Japanese ‘picture brides’ who came over from Japan to marry American men they only knew from their photographs, and were often forced into prostitution and dangerous labor.

Curfews, quarantines and border closings complicated Christmas Friday for countless people around the globe, but determination and imagination helped keep the day special.

‘We have to keep going:’ A day with the migrant caravan

"The only way to get ahead is to make sacrifices," said Joel Eduardo Espinar, on the 15th day of their journey.

Rodney Roberson hasn’t set foot on a ship in months. He’s been too devastated. “All the police and investigators ...