Following a horrific gun massacre at a Florida high school last year, the state’s public-worker pension system sold off an investment in a company that produces semi-automatic firearms. Treasury officials announced they would review other gun-industry holdings.

State lawmakers also acted in the wake of the deadly mass shooting at Florida’s Stoneman Douglass High School by introducing legislation seeking to ban the New Jersey pension system from investing in any company that manufactures guns or ammunition.

But even as the nation deals with a new wave of deadly mass shootings in Texas, Ohio and California, the divestment legislation is stalled in the State House. The pension system continues to hold other gun-industry investments, worth an estimated $25 million, according to Department of Treasury spokesman William Skaggs.

It’s unclear why the state has decided to hold onto investments that have ties to the gun industry. 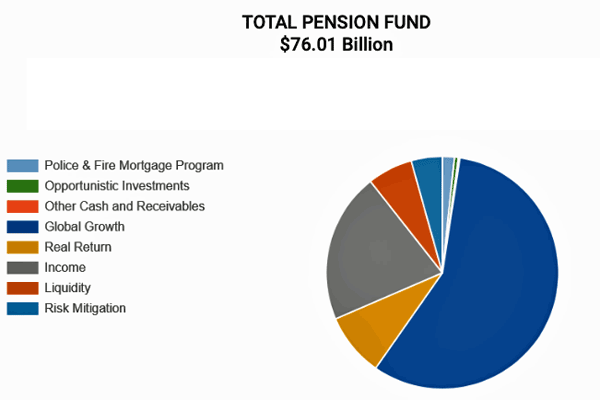 Those holdings equal just a small fraction of overall state pension assets, which were worth an estimated $76 billion as of last official accounting, and none are with the manufacturers of automatic or semi-automatic weapons sold to civilians; a semi-automatic rifle was used in the Florida attack. But they also mean public-worker retirements in New Jersey remain linked in some way to the gun industry — even if most retirees and active employees have little knowledge of those ties and may find them distasteful in the wake of the mass shootings and other gun fatalities.

In all, New Jersey’s public-worker pension system is made up of seven different funds, covering the retirements of roughly 770,000 current and retired employees, ranging from teachers to police officers to judges. Pension funds are managed by Treasury’s Division of Investment, with oversight provided by the State Investment Council, a board that meets in public on a regular basis in Trenton. But few workers and retirees keep close tabs on every pension-fund investment.

In fact, the pension system’s relinquishing of its $1.9 million investment in Vista Outdoor, which manufactures semi-automatic rifles for civilian use, had largely flown under the radar until the Murphy administration revealed it had sold off the holding. That decision followed the slaughter of 17 people at Stoneman Douglas High School on February 14, 2018. The shootings were allegedly carried out by a former student armed with a powerful semi-automatic rifle.

Getting out of guns

At the time, retailer Dick’s Sporting Goods announced it would no longer sell assault-style weapons, and New Jersey pension officials were also urged to re-evaluate all gun-industry holdings as concerns were raised about the the profitability of U.S. firearms manufacturers as they faced new scrutiny, according to SIC meeting minutes.

Meanwhile, several New Jersey lawmakers introduced legislation seeking to prohibit the pension system from holding investments in companies that manufacture firearms or ammunition. The measure said the public-pension plans must shed all investments in such companies within two years.

The legislation echoes prior pension-divestment policies enacted in New Jersey. They include a 2005 law that forced the pension system to cut financial ties with any companies doing business with Sudan’s Khartoum regime in response to its brutal treatment of people in the Darfur region. A 2008 policy prohibited investing pension-system assets in foreign companies that did business with Iran as it sought to establish a nuclear program.

But the firearms-divestment legislation has yet to advance in either house of the Legislature. Sponsors of the bill could not be reached for comment yesterday.

Murphy, a first-term Democrat, highlighted the Vista Outdoor divestment last April in a speech that detailed his first 100 days in office. He said his administration had taken action in a number of ways to fight gun violence, “not just in the name of Parkland, but of every community and family in New Jersey touched by gun violence.”

But several months later, Murphy discounted the effectiveness of pension divestments in some cases in a conditional veto of a separate bill that sought to ban the state pension system from investing in companies that shirk their legal responsibility to remediate contaminated Superfund sites in New Jersey. “I do not believe that (divestment) should be the only available response when companies in which the State has invested pension funds behave poorly,” he said in the conditional veto.

Instead, Murphy encouraged lawmakers to vote to establish a formal state investment-evaluation policy known as “ESG” that takes into account other factors in addition to the bottom line. (ESG stands for environmental, social and governance.) He said the adoption of ESG policies in states like California and New York have “positively changed business practices and allowed for more robust engagement between the state and the investment community.”

Murphy’s conditional veto has yet to be considered in either house of the Legislature, but a formal ESG policy was eventually adopted by the New Jersey SIC in September 2018.

It was members of an ESG subcommittee of the SIC who were originally tasked with reviewing “investments in firearm and ammunition manufacturing and retail companies” after the Florida school shooting, according to the SIC’s meeting minutes. A Treasury news release announcing the Vista Outdoor divestment also indicated the SIC would “explore further potential actions related to civilian firearm manufacturers and retailers.”

Treasury spokesman Skaggs stressed yesterday that none of the remaining holdings are with manufacturers of automatic or semi-automatic weapons sold to civilians. But he did not provide additional details about the state’s remaining gun-industry holdings.

Murphy issued a statement that said those killings should serve as “wake-up calls” for national leaders to enact more reforms.

“I am proud that New Jersey is leading the way in gun safety. It’s well past time for Congress to follow,” he said. “Inaction is inexcusable.”

Winning lottery jackpot is lucky for some, tragic for others

The latest winner of a big jackpot came Friday, when a single ticket sold in Illinois matched the numbers for a $1.337 billion Mega Millions prize.

A lottery official says there is one winning ticket and it was purchased at a store in the Chicago suburb of Des Plaines.

The plunge in prices for Bitcoin and other cryptocurrencies provides a cautionary tale for the few public pension funds that have dipped their toes into the crypto pool.