You know how you can buy climbing shoes and scale a rock wall at REI? Or buy yoga pants and take a yoga class at Lululemon?

At City Winery, the newest tenant to sign to be part of Fashion District Philadelphia, you will be able to drink wine and take a wine-making class because the winery makes its own cabernets and chardonnays, said Joseph Coradino, Fashion District chairman. He’s also the CEO of the Pennsylvania Real Estate Investment Trust, co-developer of Fashion District along with Macerich of Santa Monica, California.

“They import their grapes from various places, and they make wine. They have huge barrels, just like when you go visit a winery in California,” Coradino said.

Fashion District, the replacement for what was the Gallery mall, introduced City Winery at the Ninth and Market development site Thursday. A dining and performance venue, City Winery is known for luring A-list performers to is various locations. Prince once performed there, along with David Crosby and Patti Smith.

City Winery founder and CEO Michael Dorf said Philadelphia is the perfect city for his kind of establishment, and Fashion District is the perfect space.

“We’re really psyched about Philadelphia. The [Fashion District] space is perfectly conducive to what we want to do,” Dorf said. “Philly is a great city, and there’s such exciting things happening in the food and culinary scene.” 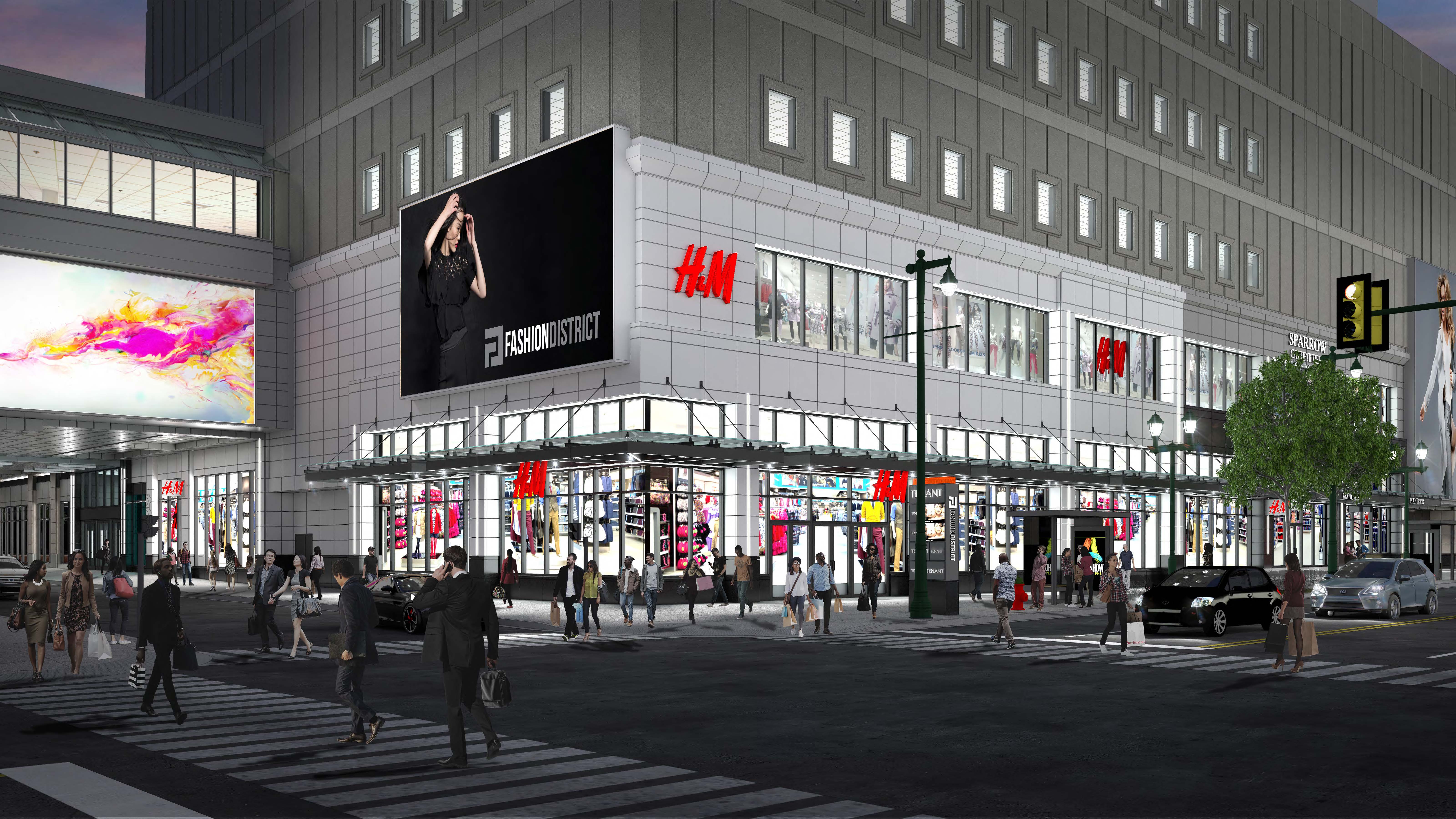 Artist’s rendering shows the entrance to H&M store at the Fashion District mall being developed in Center City. (JPRA Architects)

Plans also call for an AMC “dine and recline” movie theater, where alcohol will be served. The 800,000-square-foot development will take up three square blocks starting at Eighth and Market, then stretching west.

Macerich disclosed that the Fashion District project’s budget has grown to as much as $420 million, up from a previous $325 million.

Coradino said the biggest difference between the new development and the old Gallery is that the new storefronts will face outward, toward the street, not inward like a traditional mall.

“The Gallery was built like an old-fashioned mall where it was sort of turned inside … we thought it was important that as you walk down Market Street, there were stores that front that street,” he said.

He said the development is 80 percent rented, but Fashion District is working with the Enterprise Center to identify Philadelphia businesses as prospective tenants, he said.

The grand opening is set for September of 2019, pushed back from its original November 2018 date to give Burlington department store a chance to relocate to Eighth Street to make way for the movie theater.

After 13 years, the head of Philly’s Independence Visitors Center is stepping down

As Cuorato steps down, he’s optimistic about the direction Philly tourism is heading.

The previous 24-hour record was set by the Cubs in 2016 after they defeated the Dodgers in the NLCS.

Nearly 200 employees walk off job at Philadelphia Museum of Art

Members of the union said they plan on returning to work over the weekend with the goal to resume negotiations next week.