A key oversight board is set to vote Tuesday on a proposed regulation that would have Pennsylvania join a regional cap-and-trade program.

Under the Regional Greenhouse Gas Initiative (RGGI), made up of 10 northeastern states, power plants buy allowances for the carbon dioxide (CO2) they emit. That makes dirtier sources of power less competitive selling electricity to the grid. They generate less while cleaner sources ramp up, lowering harmful emissions. States invest the money from the allowance auctions.

Those who want Pennsylvania in RGGI (pronounced “Reggie”) say it would be an important step to mitigate climate change and help grow the economy.

People who want to keep the commonwealth out of RGGI say it won’t cut emissions and will eliminate jobs.

StateImpact Pennsylvania set out to learn whether RGGI reduces greenhouse gas emissions without harming the economy.

Here’s a look at the key issues:

A decade ago, environmental engineer Costa Samaras and his colleagues at Carnegie Mellon University wrote a brief titled: Cap and Trade is Not Enough.

But he still thinks a carbon price is a good foundation for climate policy.

“If we didn’t have it, we would miss it,” he said. “But it’s not alone driving this big decrease in carbon emissions, nor would it drive the type of big reductions that we need it to.”

Some economists, such as Emily Wimberger, a climate economist at the research firm Rhodium Group, say any price will help drive down carbon emissions because it sends a signal to businesses to invest in cleaner technologies.

Others are skeptical. RGGI’s emissions cap has been much higher than actual emissions, and allowances are cheap; the price for a ton of carbon has never passed $7.50.

“Prices have been so ridiculously low in RGGI that it’s very difficult to argue that it’s been meaningful,” said Arthur van Benthem, an associate professor of Business Economics and Public Policy at the Wharton School of the University of Pennsylvania. He noted cap-and-trade programs in Canada and the European Union see prices closer to $30 per ton.

RGGI is a cap-and-trade program among 10 northeastern states to reduce emissions from the power sector.

Dallas Burtraw, an economist and senior fellow with the think tank Resources for the Future, says RGGI is modest, but successful. That’s likely because of a mix of the price on emissions, strategic investments, and environmental regulations.

“You really need to play all three of these instruments in order to achieve that outcome,” Burtraw said.

By joining RGGI, the Department of Environmental Protection estimates the commonwealth will prevent 180 million tons of carbon dioxide pollution by 2030. That’s a 25 percent decrease between 2022 and 2030.

In RGGI states, the program says, CO2 emissions from power plants have fallen by 45 percent from a base level measured from 2006-2008. The cap has been adjusted to put more pressure on emitters. The latest change requires a 30 percent reduction from 2020 levels by the year 2030.

Other factors have helped curb emissions nationwide. RGGI started during the Great Recession, which drove down energy demand, and as cleaner-burning natural gas started booming.

A 2015 paper in the journal Energy Economics concluded about half of the region’s reductions can be attributable directly to the RGGI program.

Through simulations, researchers found emissions would have been about 50 percent higher by 2012 in RGGI states were it not for the combination of policy, changes in the natural gas market, and other macroeconomic factors.

Nathan Chan, a professor of environmental and public economics at the University of Massachusetts Amherst, published a paper last year on the unintended consequences of RGGI, using states outside the program as a control group.

He and his co-author found the program works to drive down emissions in member states, though they attribute only 20 percent of reductions to RGGI.

“[RGGI states] have a downward trend, and that downward trend drops more sharply after RGGI’s implemented than it does anywhere else in the country,” he said.

But Chan said he also found a drawback: because RGGI’s carbon price shifted generation among power plants in the region, it redistributed another lung-irritating pollutant, sulfur dioxide, closer to larger population centers.

And then there’s leakage — what Wimberger calls “whack-a-mole.”

RGGI’s detractors say that if emissions go down in Pennsylvania because it’s burning less coal, other places will just pick up the slack, rendering the commonwealth’s reductions moot.

Wimberger said leakage is a legitimate concern, but there are mechanisms that can be put in place to minimize it. The regional electric grid that Pennsylvania belongs to has created a task force to look at the issue.
“I think the main concern of leakage is if you’re completely ineffectual because it’s all being shifted elsewhere,” Chan said.

Because Pennsylvania generates so much energy, Burtraw said leakage to other states like Ohio and West Virginia will likely be modest.

He’s done modeling to show that if Pennsylvania spends auction revenue to incentivize clean energy technologies, and raises standards for how much electricity must be generated by renewables, the state could see negative leakage. That means emissions would fall inside and outside the state.

“Pennsylvania faces no threat of yielding its position as the Saudi Arabia of North American energy supply,” Burtraw said.

The RGGI states say the program has been good for their economies.

Over the life of the initiative, nine RGGI states report training more than 8,000 workers. They’ve invested more than $2.5 billion raised through allowance auctions in things such as clean energy, energy efficiency, and electric bill assistance.

A 2018 study from Analysis Group found RGGI netted about $1.4 billion in economic value added between 2015-2017. It said RGGI compliance led to overall job gains. Those jobs include workers who perform efficiency audits and who install energy efficiency measures in residences and commercial buildings, and staff performing training on energy issues.

DEP projections show a net increase of 27,000 jobs under RGGI.

Most studies on RGGI’s economic impact tend to look at the big picture, but the program targets the power sector.

Travis Roach, an associate professor of economics at the University of Central Oklahoma, put out a working paper this summer looking at worker reallocation in the RGGI states.

Roach found no evidence that RGGI affected employment or earnings in any industry, even among fossil fuel generators.

The paper, which Roach plans to submit for journal publication, but has not been peer-reviewed yet, found some evidence of increased churn in the labor market. He said rates of hiring, separation, and reallocation have all increased in the RGGI area relative to non-RGGI states. But that was almost entirely in non-utilities industries.

Some states have used their RGGI proceeds to support workers and communities affected by retiring power plants. Massachusetts, for example, assembled a task force to study the impacts of its coal-fired plants’ closures and sent state money to areas dealing with the loss.

An important caveat: Pennsylvania is coal country. The RGGI states, for the most part, are not.

Coal generation will decline under RGGI, and program opponents say it will destroy thousands of jobs.

“There definitely would be a downturn in employment in coal jobs and those spin-off jobs,” said the alliance’s executive director Rachel Gleason.

Adele Morris, Policy Director for the Climate and Energy Economics Project at the Brookings Institution, said a climate policy such as RGGI will have “devastating effects” on the industry.

But, she added, market forces are already acting against coal. 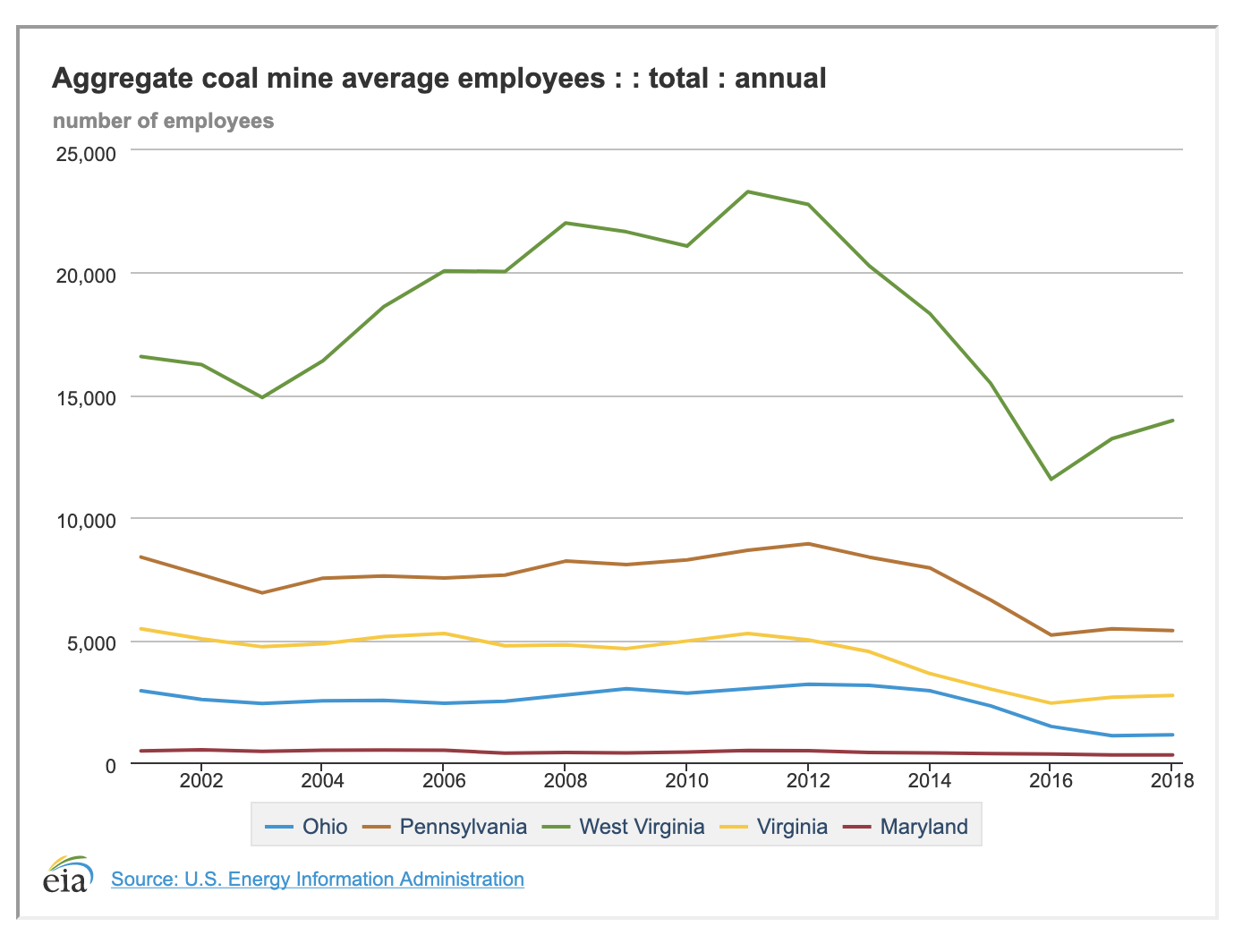 Forty-two coal-fired generators in Pennsylvania have retired since 2009. Twelve have converted to natural gas since 2011, according to data from the Energy Information Administration.

Pennsylvania gets about 17 percent of its electricity from coal–down from nearly 50 percent a decade ago.

The decline is expected to continue. DEP projects that, even without RGGI, coal will make up only 3 percent of the state’s electric generation by 2030.

Gleason and other coal advocates don’t see that as a reason to support RGGI.

“If they are going to close anyway, why rush it?” she said.

DEP estimates the state will bring in around $300 million in the first year of RGGI from allowance auctions. If Pennsylvania joins RGGI through regulation, as it expects to, the money will go to the state’s Clean Air Fund, which can only be used to help reduce air pollution.

Opponents believe money in that fund can’t, or won’t, be used to provide worker training or relief to people who lose their jobs.

The Wolf Administration has said if lawmakers work with them on the process, some of that money can be diverted and used to help affected communities.

So far, Republican leadership in the legislature has not engaged, instead trying to stop the governor’s executive order and criticizing DEP for not doing more for coal communities.

Groups across the ideological spectrum are calling for the legislature to work with RGGI.

Chad Forcey, executive director of the Pennsylvania Conservative Energy Forum, said the decision to join RGGI has already been made. While the group doesn’t have a position on RGGI itself, Forcey said lawmakers need to come to the table to improve the program and find ways to help miners and farmers.

Mandy Warner, Director for Climate and Clean Air Policy at the Environmental Defense Fund, said the energy transition is going to continue over the next decade.

“Whether people like it or not, the conversation does need to happen,” she said.

Morris said it’s important for coal states and communities to prepare for the future while they still have the resources.

“If you don’t take any action now to reduce emissions, you’re going to be in worse condition when we do finally have a federal program,” she said.

She sees some kind of federal policy as inevitable. Climate scientists say we must cut emissions, and fast, to avoid the most severe effects of climate change.

The experts’ take on RGGI can be summed up by Wimberger: “Carbon pricing does work. It’s just, it can be messy sometimes.”

The state’s choices will affect what happens if Pennsylvania joins RGGI.

RGGI can help drive down emissions, experts say, but it won’t save the climate.

Some people will likely lose their jobs, but that could also happen without RGGI. The program will at least provide some money that could be used to help them.

Tuesday’s vote by the Environmental Quality Board could be the next step for Pennsylvania to join RGGI.

But joining would be just the first of many decisions for the commonwealth as it faces a shifting energy landscape and the risks of climate change.

The odds are inching up along with the thermometer. Last year, the same forecasters put the odds at closer to 40% and a decade ago it was only 10%.

Hey nature nerds, you could help all of us understand climate change in the Philly area

Since 2019, Philadelphians have competed in the City Natural Challenge by logging species of plants and animals. The records are quite useful for scientists.