The Lower Merion School District is facing objections from local environmentalists as it looks to build new sports fields on an area covered by hundreds of trees, many of which are more than a century old.

The Montgomery County district is currently experiencing its highest enrollment levels in more than 40 years and says it is the fastest-growing in Pennsylvania. For years, the district has struggled to find new space in which to expand.

Back in 2018, Lower Merion School District had hoped to acquire 6.9 acres of Stoneleigh Garden, a 42-acre estate in Villanova that had been converted from a private home into a public garden, as a possible site for a new middle school and sports complex. It says the area it sought is currently a compost pile that had been earmarked for future development. The district said its current site at 1860 Montgomery Ave. doesn’t have enough space for all the sports in which seventh and eighth graders participate, but it was rebuked after numerous protests and public campaigns to “Save Stoneleigh.”

The campaigns garnered enough public support to warrant Gov. Tom Wolf signing a bill (sponsored by then-State Rep. Warren Kampf of Tredyffrin Township) that now requires court approval before property that is under a conservation easement can be acquired through eminent domain.

Instead, in 2019 the district acquired properties at 1835 County Line Rd. and 1800 Montgomery Ave., adjacent to Stoneleigh and one block away from Villanova University’s campus. The issue now is that those properties sit atop ecologically invaluable wetlands that are home to about 500 mature native trees, many of them over 80 feet tall and over five feet in diameter.

The proposal to tear down the trees to build middle school sports fields mobilized local environmentalists to further demonstrate against the district’s development plans. The most vocal group has been Climate Action Lower Merion (CALM), which circulated a Change.org petition that currently has nearly 1,900 signatures. Last month, the group protested outside Lower Merion School District offices demanding that officials pause their plans to develop the site and look for greener alternatives.

The district says poor ventilation could be to blame for eight students in one classroom at Penn Valley Elementary testing positive for COVID.

Eurhi Jones, a muralist and climate activist with CALM, said the site should be celebrated, not destroyed.

“We should be treating older trees like the Betsy Ross House or Independence Hall,” Jones said. “We shouldn’t even conceive of clear-cutting forests like this for playing fields.”

She said the district’s plan to cut down hundreds of mature trees in a forest setting to make a “monoculture of grass” would release harmful levels of carbon dioxide into the atmosphere, further harming the ozone layer and exacerbating the negative environmental effects of global warming.

Jones called the district’s plan “deforestation with public money in the name of children.”

Lower Merion School Board president Lucy Klain said the district has extensively considered other sites that are farther away.

“We all know its location isn’t ideal, but open space is limited in our inner-ring suburb,” Klain said. “We also know some of the alternate properties that have been suggested, none of which are available to the district.”

The district proposed planting trees on new sites across the area, but some believe it purposely timed its proposal to avoid new deforestation regulations subsequently passed by Lower Merion Township. Those rules more strictly cap the number of trees legally allowed to be taken down and require developers to replace trees at a 1:6 ratio (If you knock down one, you must plant six to compensate.) At the time the district submitted its proposal, the ratio was 1:1.

CALM’S Nancy Winkler called the timing of the proposal an “outrage” in a letter to the school board, saying the plan is only proceeding because it got grandfathered into the old code.

“I understand how a single-focus, for-profit developer would elect to use such a maneuver,” she wrote, “but I am shocked that an elected body in Lower Merion would make this same move.”

Environmentalists, including Penn Valley Civic Association president Michelle Detwiler, argue that the district’s plan to plant new trees does not fully replace the ecological value of older ones.

“The removal of those trees proposed would release almost 5,000 metric tons of carbon dioxide into the atmosphere over the next 15 years,” she said, adding that number would increase over 50 years as the soil continued to lose carbon. She said the compensatory trees would do “little in the next coming decades to make up for any loss of carbon in the above-ground biomass, and in the soil.” 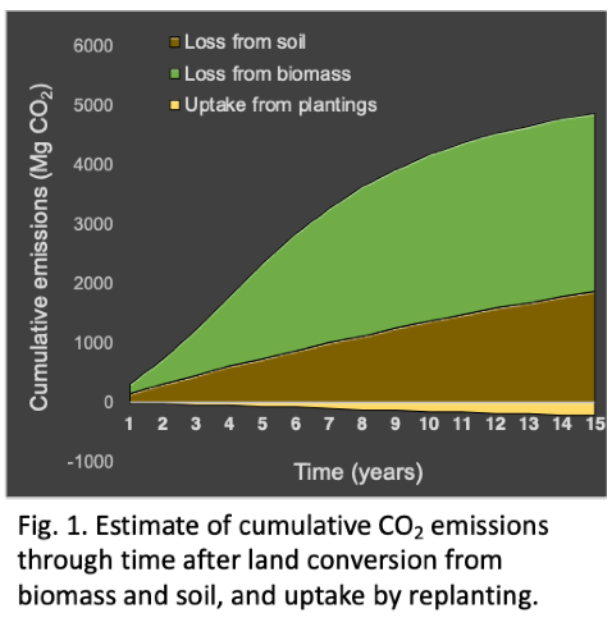 Jennifer Lynn talks with Andrea Gosfield, who calls for a more racially equitable district after her son showed her racist social media posts by schoolmates.

The district said the carbon emissions from deforestation “could” be less than that of having to bus children to other sports fields.

Klain said the other proposed sites “have their own carbon impact. So a one-time tree removal versus ongoing additional buses … we need to look at the overall impact.”

Environmentalists widely refute that claim. The Federation of Civics of Lower Merion and Narberth, composed of 16 member civic associations, released an open letter to the district and township. In it, they cited a study conducted by a class taught by Villanova ecology professor  Adam Langley that calculated the amount of carbon dioxide destroying the trees would release. He found the annual carbon emissions from the deforestation to be equivalent to that of 3,200 vehicles annually. He also estimated that it would take at least a century to restore the tree biomass carbon and even longer to recover the soil carbon, both integral to healthy ecosystems.

District officials said they will submit their official proposal to the township next month, citing a need to develop the fields quickly given the district’s overcrowding.

In a statement to WHYY News, Lower Merion Township Ward 5 Commissioner Ray Courtney said he appreciated the school board’s decision to put the plan on hold, so the two boards can “cooperate on a search for viable alternatives.”

“With the current plan, we are in the difficult position of deciding between public education and environmental sustainability,” Courtney wrote. “… we have less than 20 years to make global warming plateau below an increase of 2 degrees Celsius — a target that we are not currently on track to hit.”

Courtney said the township “should not take the loss of 500 trees lightly.”

School Board president Klain said the district is optimistic that the proposed fields would be a positive for the community, noting that it fulfills a need that is identified in the township’s own comprehensive plan to handle its growing population.

“There comes a time when we must move forward. The kids are already in our schools, so it’s not as if we’re building fields for kids who aren’t already part of our school district,” Klain said.

She added that the district is open to alternatives.

“If there are those who have ideas for a potential space that is large enough, please share with your township commissioner or local school board member,” Klain said. “This is something that has been thoroughly thought through, and the need is real.”

The plan is currently being revisited by the school district as it takes into account more input from community members.

The water company is telling residents in the affected areas do not drink the water before boiling it first.

A new place to gather: Pottstown community is reviving a historic cemetery

Artists and volunteers came together on Saturday in Montgomery County to celebrate, revive, and raise funds for Pottstown’s Edgewood Historic Cemetery.

The Montgomery and Delaware counties Habitat will plant about 250 trees this Saturday in Pottstown, Norristown, Upper Darby, and Lansdowne for Earth Day.