The names of hundreds of U.S. law enforcement officers, elected officials and military members appear on the leaked membership rolls of a far-right extremist group that’s accused of playing a key role in the Jan. 6, 2021, insurrection at the U.S. Capitol, according to a report released Wednesday.

The Anti-Defamation League Center on Extremism pored over more than 38,000 names on leaked Oath Keepers membership lists and identified more than 370 people it believes currently work in law enforcement agencies — including as police chiefs and sheriffs — and more than 100 people who are currently members of the military.

It also identified more than 80 people who were running for or served in public office as of early August. The membership information was compiled into a database published by the transparency collective Distributed Denial of Secrets.

The data raises fresh concerns about the presence of extremists in law enforcement and the military who are tasked with enforcing laws and protecting the U.S. It’s especially problematic for public servants to be associated with extremists at a time when lies about the 2020 election are fueling threats of violence against lawmakers and institutions.

“Even for those who claimed to have left the organization when it began to employ more aggressive tactics in 2014, it is important to remember that the Oath Keepers have espoused extremism since their founding, and this fact was not enough to deter these individuals from signing up,” the report says. 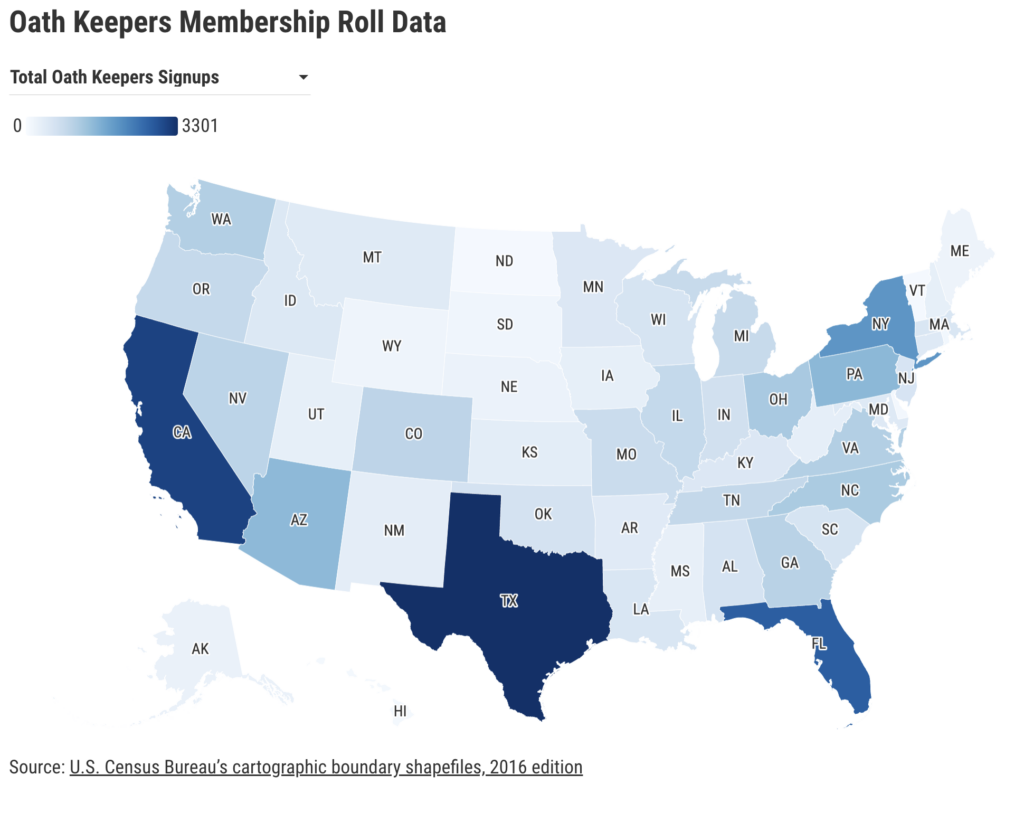 The House committee investigating Jan. 6, 2021 has shown how the deadly Capitol attack was sparked when the incumbent president, Donald Trump, refused to cede the election.

Appearing in the Oath Keepers’ database doesn’t prove that a person was ever an active member of the group or shares its ideology. Some people on the list contacted by The Associated Press said they were briefly members years ago and are no longer affiliated with the group. Some said they were never dues-paying members.

“Their views are far too extreme for me,” said Shawn Mobley, sheriff of Otero County, Colorado. Mobley told the AP in an email that he distanced himself from the Oath Keepers years ago over concerns about its involvement in the standoff against the federal government at Bundy Ranch in Bunkerville, Nevada, among other things.

The Oath Keepers, founded in 2009 by Stewart Rhodes, is a loosely organized conspiracy theory-fueled group that recruits current and former military, police and first responders. It asks its members to vow to defend the Constitution “against all enemies, foreign and domestic,” promotes the belief that the federal government is out to strip citizens of their civil liberties and paints its followers as defenders against tyranny.

More than two dozen people associated with the Oath Keepers — including Rhodes — have been charged in connection with the Jan. 6 attack. Rhodes and four other Oath Keeper members or associates are heading to trial this month on seditious conspiracy charges for what prosecutors have described as a weekslong plot to keep then-President Donald Trump in power. Rhodes and the other Oath Keepers say that they are innocent and that there was no plan to attack the Capitol.

The Oath Keepers has grown quickly along with the wider anti-government movement and used the tools of the internet to spread their message during Barack Obama’s presidency, said Rachel Carroll Rivas, interim deputy director of research with the Southern Poverty Law Center’s Intelligence Project. But since Jan. 6 and Rhodes’ arrest, the group has struggled to keep members, she said.

That’s partly because Oath Keepers had been associated so strongly with Rhodes that the removal of the central figure had an outsized impact, and partly because many associated with the group were often those who wanted to be considered respectable in their communities, she said.

“The image of being associated with Jan. 6 was too much for many of those folks,” she said.

At the Jan. 6 hearings, race isn’t discussed much. Still, it’s a central issue

In the opening moments of the Jan. 6 Committee hearings, Chairman Bennie Thompson drew a line across history, connecting the Lost Cause to the Big Lie.

Among the elected officials whose name appears on the membership lists is South Dakota state Rep. Phil Jensen, who won a June Republican primary in his bid for reelection. Jensen told the AP he paid for a one-year membership in 2014 but never received any Oath Keepers’ literature, attended any meetings or renewed his membership.

Jensen said he felt compelled to join because he “believed in the oath that we took to support the US Constitution and to defend it against enemies foreign and domestic.” He wouldn’t say whether he now disavows the Oath Keepers, saying he doesn’t have enough information about the group today.

“Back in 2014, they appeared to be a pretty solid conservative group, I can’t speak to them now,” he said.

“I don’t even know what they’re posting. I never get any updates,” said Mike Hollinshead, sheriff of Idaho’s Elmore County. “I’m not paying dues or membership fees or anything.”

Hollinshead, a Republican, said he was campaigning for sheriff several years ago when voters asked him if he was familiar with the Oath Keepers. Hollinshead said he wanted to learn about the group and recalls paying for access to content on the Oath Keepers’ website, but that was the extent of his involvement.

Benjamin Boeke, police chief in Oskaloosa, Iowa, recalled getting emails from the group years ago and said he believes a friend may have signed him up. But he said he never paid to become a member and doesn’t know anything about the group.

Eric Williams, police chief in Idalou, Texas, also said in an email that he hasn’t been a member or had any interaction with the Oath Keepers in over 10 years. He called the storming of the Capitol “terrible in every way.”

“I pray this country finds its way back to civility and peace in discourse with one another,” he said.

“We will take any effort to influence witness testimony very seriously,” Cheney said.

The Jan. 6 panel said it is looking closely at any ties between people in Trump’s orbit and extremist groups accused of helping put into motion the violence at the Capitol.

Experts warn that extremist groups may see anti-LGBTQ rhetoric by influencers as a call to action.