What’s the difference between legal and illegal immigration?

Foreigners who want to live and work permanently in the United States can do so legally by first getting an immigrant visa and then applying for a green card to become a permanent resident. With a green card in hand and at least five years of U.S. residency, immigrants can then complete the naturalization process to become a citizen. About 1 million immigrants a year come to the U.S. legally. Visa-seekers must pass FBI and other background checks; anyone with a known criminal history or considered a security risk typically gets denied.

Immigration is highly regulated and driven by three goals: employment, family reunification, or humanitarian protection. That means if you’re not a refugee or asylum seeker fleeing persecution, a highly skilled and educated worker sponsored by a U.S. employer, or someone with an immediate relative who’s already a citizen or permanent lawful resident, U.S. citizenship and permanent residency can be elusive, if not impossible.

The United States limits the number of immigrants it admits annually and won’t give any one country more than 7 percent of U.S. visas available for the year. So people from countries that send the most immigrants to the United States, such as Mexico, China, and the Philippines, can wait a long time, even decades, to come here legally.

The difficulty of securing a visa has led some, in desperation, to cross the U.S. border illegally. Others come legally, but overstay their visas. Federal Homeland Security authorities estimated 630,000 foreigners overstayed their visas in 2016. Canadians were the biggest group of violators. 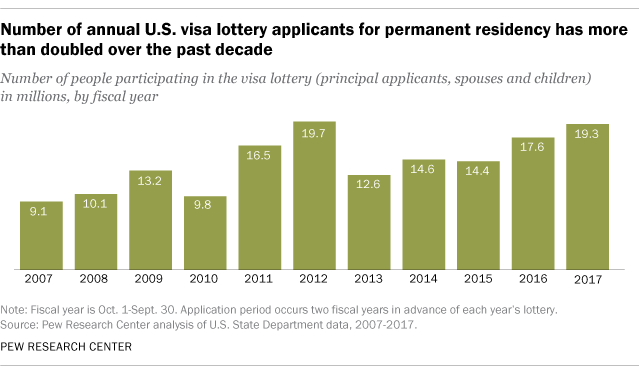 There’s another population of unauthorized immigrants who didn’t break the law knowingly: foreign-born children brought without papers to the United States by their parents. President Obama created a policy, the Deferred Action for Childhood Arrivals (DACA), in 2012 to allow them to live and work legally in the U.S. without fear of being deported. It’s unclear if President Trump will repeal that, although authorities have stepped up deportations of DACA-protected people arrested for crimes. (Under the Obama administration, an arrest wasn’t enough to trigger deportation; that occurred only after conviction.) Almost 1.5 million people have been approved for DACA benefits, according to federal data.

What’s the process to become a U.S. citizen?

You start with an immigrant visa, which typically lasts six months to a year and can be renewed. There are all sorts of visas tailored to different types of immigrants, including skilled professionals coming to work in the U.S.; orphans up for adoption; relatives, foreign spouses or fiances of U.S. citizens; Iraqis and Afghans who have worked for the U.S. government; and religious workers.

You then must apply for a green card, which allows the holder to live permanently in the U.S. indefinitely — so long as you don’t commit a crime. To apply for citizenship, you have to be at least 18 years old and have lived lawfully and continuously as a permanent resident in the U.S. for at least five years (unless your spouse is a citizen or you’re a refugee or received your green card through political asylum).

You also must be “of good moral character,” be able to read, write, and speak English, and pass a 10-question civics test about U.S. history and government. Immigration authorities fingerprint you and interview you, asking you about your reasons for wanting to become a citizen, your background in your country of origin, and your past travels.

The process can take years. If approved for citizenship, you must take an allegiance oath at a swearing-in ceremony, where you’ll receive a naturalization certificate that confirms your citizenship.

Top 10 largest immigrant groups in the U.S.
Infogram
Share this

The agreement comes roughly a month after Pro-Managed LLC was sued in federal court.

The order by Chief Justice Roberts comes as conservative states are pushing to keep limits on asylum seekers that were put in place during the beginning of the pandemic.

The court’s decision means the restrictions are still on track to expire on December 21.