A rocket launch will likely dazzle sky-gazers throughout the region Saturday morning.

The rocket will carry more than 7,000 pounds of food, clothing, and experiments to the International Space Station, according to a NASA release release.

With clear skies in the forecast, the Jersey Shore and greater region will likely see the rocket’s flames and smoke trail as it heads toward space.

The rocket will become visible to the south/southeast ranging between 60 seconds after launch in Cape May County to 150 seconds in Monmouth County. 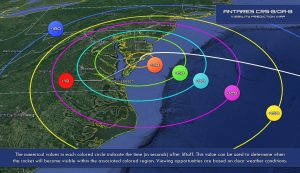 Live coverage of the launch is available via UStream beginning at 1:15 a.m. here.

Be sure to monitor Wallops Flight Facility on Facebook for up-to-the-minute launch information.

The canines will be there to comfort emergency responders, families and friends of the victims, as well as the community.

The Greater South Jersey Chorus will perform a dramatic work that links to stops along the Underground Railroad in the region.

Despite inflation and labor challenges, Jersey Shore tourism boosters expect a good year, just not as good as 2021.