This year, a combination of pauses, new federal policies and screening procedures dramatically cut the number of refugees finding new homes in Pennsylvania. From 3,679 in budget year 2016, the number fell to 2,698 in 2017, a 26.7 percent decrease, according to the Pennsylvania Refugee Resettlement Program.

That drop-off appears especially steep due to an uptick in refugee arrivals during President Barack Obama’s last year in office. Local refugee resettlement agencies say the decline was also driven by Trump administration policies that could have long-lasting effects. 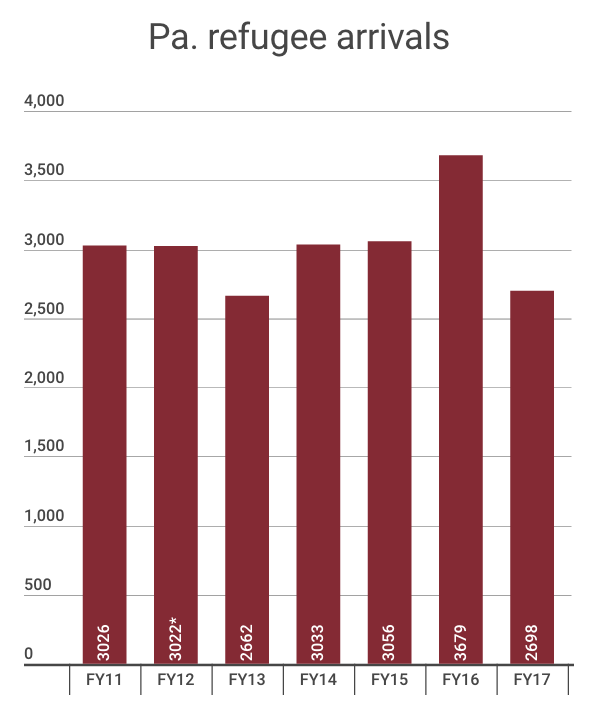 “It’s incredibly mercurial, it’s incredibly capricious, and it’s incredibly hard to manage,” said Cathryn Miller-Wilson, executive director of the refugee resettlement group HIAS Pennsylvania, of the federal government’s back and forth with the courts over refugee policy this year.

In January and March, President Donald Trump issued executive orders limiting travel from seven countries and suspending refugee arrivals, citing concerns about national security and terrorism. Local governments and advocacy groups challenged those orders in court, leading to delays and confusion about who would be allowed in. The president also lowered the total number of refugees allowed into the country each year from 110,000 to 45,000.

Stephanie Gromek, development and communications coordinator with Church World Service in Lancaster, said when the refugee portion of the “travel ban” executive orders finally went into effect, much of the initial outrage had subsided.

“We just got off of a full and outright 120-day suspension to the entire refugee resettlement program,” she said. “That was something that didn’t get a whole lot of coverage,” but which affected refugees waiting outside the U.S. who had already cleared many of the hurdles to resettlement. Clearances to come to the U.S., which include health and security screenings, are time sensitive — meaning people in the pipeline when resettlement halted had to start over again.

During the suspension, federal officials also worked on new screening procedures. Refugees already underwent the “most intensive security screening of any traveler to the United States,” carried out by multiple federal agencies, including the FBI and Department of Homeland Security, according to U.S. State Department materials.

In late October, heads of the Departments of State and Homeland Security, as well as the Office of the Director of National Intelligence, recommended further screening procedures to detect fraud and national security threats.

“Enhanced security vetting procedures will be applied to all refugees regardless of country of origin and include enhanced biometric collection, improved information sharing, and new training procedures to strengthen fraud detection,” said spokeswoman Stephanie Sandoval, with the Bureau of Population, Refugees and Migration. “To maintain the integrity of security screening procedures, we won’t go into further detail.”

Resettlements resumed, but at a slower pace.

“[In] October we resettled a grand total of two refugees, both of them Russian,” said Miller-Wilson, whose group operates in Philadelphia. That’s down from a typical month of 15 to 25 arrivals in 2016. Prior to the new screening procedures, processing time ran between a year and a half to two years, according to the Department  of State.

Refugee resettlement work requires organizations to maintain a posture of readiness to house, clothe, feed and shepherd families to appointments, while not always knowing who will come or when. Once refugees do arrive, the federal government pays these organizations for a limited time, usually only three months, to propel refugees into self-sufficiency in a new country. That may come after the newcomers experience years of transience, often in a country other than the one they fled.

“We’re all concerned about the number itself, and the unevenness with which we’re actually receiving word and being asked to resettle refugees,” said Margaret O’Sullivan, executive director of Nationalities Service Center in Philadelphia. “That’s our job, to be ready.”

As a result of the downturn, O’Sullivan described cutting or losing around a million dollars from the group’s budget related to refugee resettlement this year, due to reduced state grants and lower resettlement numbers. Church World Service let go half of its employees who worked in resettlement, according to Gromek. Even with these cutbacks, O’Sullivan said, the focus is on the people they are trying to help.

“When we talk about these numbers, and I know this might sound overly sentimental, but these are lives,” she said. “It’s heartbreaking to watch a family here, that a family member won’t be joining them.” 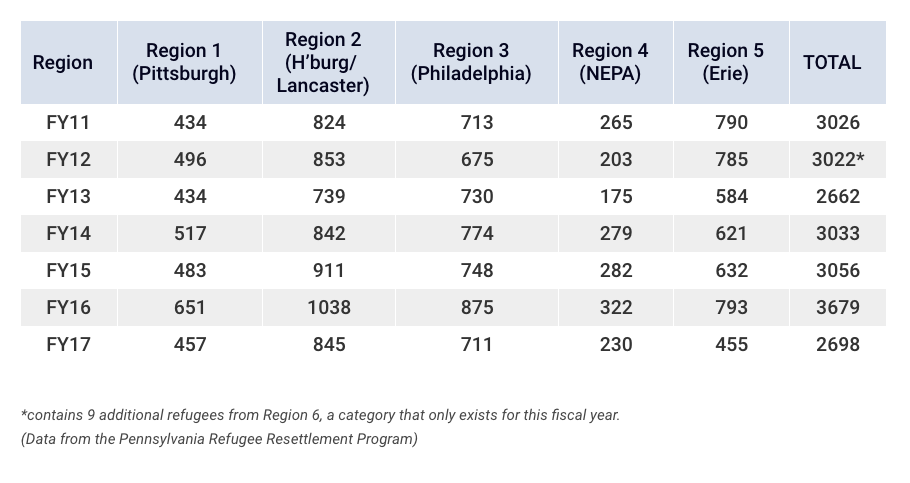 Texas Gov. Greg Abbott has repealed his traffic-clogging immigration order that backed up commercial trucks at the U.S.-Mexico border this week.

In visit, Biden will thank Polish leader for refugee efforts

Poland is hosting thousands of American troops and is taking in more people fleeing the war in Ukraine — more than 2 million — than any other nation.

New Jersey is open, but Ukrainian refugees likely to stay in Europe

N.J. Gov. Phil Murphy has put out the welcome mat for Ukrainian refugees, but the White House says most refugees have expressed a desire to stay in Europe.