Understanding and teaching the languages of tribes.

Thomas Jefferson was convinced that the languages of native tribes in North America held important clues to the past. There were hundreds of tribes – the Cherokee, Shawnee, Myaamia and Apache, just to name a few.

In “Notes on the State of Virginia,” published in 1784, Jefferson wrote that “a knowledge of their several languages would be the most certain evidence of their derivation which could be produced. It is, in fact, the best proof of the affinity of nations which ever can be referred to.”

“Jefferson’s own policy was basically, if they cooperate, and assimilate that’s fine. If they resist, we’re going to fight them and kick them out,” said Brian Carpenter, curator of Native American Materials at the American Philosophical Society.

Jefferson thought that many tribes were not going to be around much longer, and he wanted to preserve their languages for posterity.

He came up with a list of about 200 words that he thought would be present in all languages. Animals, body parts, natural phenomenons. Words like sky, pine, squirrel, and nose.

Once he finalized his list, Jefferson had it printed, and gave it to anybody who might interact with Native tribes.

“[It included] traders, missionaries, military people, those who were involved in treaty negotiations, so this is why he gave them to Lewis and Clark, he got a number of lists from them,” said Carpenter.

Jefferson was asking them to write down how the native people they encountered said those words. He was crowdsourcing.

And then, people would send the lists back to Jefferson.

“I have now been 30 years availing myself of every possible opportunity of procuring Indian vocabularies to the same set of words,” the president wrote in a letter.

But the thing is – he never got around to analyzing those vocabularies. He planned to do that once he retired.

A priceless collection is lost

“So when he left the White House, he put all of his stuff into many trunks, and put them on a barge, going on the James river going towards Monticello,” said Carpenter. “While this barge was going down there, a thief came upon it, and saw these and rifled through them.”

Jefferson later described the incident in a letter.

“The thief being disappointed on opening it, threw it into the river, all its contents of which he thought he could make no use. Among these were the whole of the vocabularies. Some floated ashore and were found in the mud; but these were very few, and so defaced by the mud and water that no general use can ever be made of them.”

Carpenter said Jefferson was “quite depressed” about this. “Now, he’s also a little bit dramatic, because the way he puts it, it sounds like everything was lost, but a little bit that was saved.”

What was saved of Jefferson’s collection now lives at the American Philosophical Society, carefully preserved.

Some of Jefferson’s vocabulary lists that were tossed into the river survived, but they remain damaged. (Alex Stern/WHYY)

“You can see that there’s still remnants of mud from when they were down in the silt,” said Renee Wolcott, a conservator at the society.

“So these are all moldy and have large areas of loss. They are no longer moldy, but they were moldy, which is why there’s so much paper missing.”

It’s part of her job to make sure that what’s left of these vocabularies is preserved for future generations – which is a tough job.

“So for example, these vocabularies, they have both letter printed ink, which is oil-based ink, which is very stable over time, and then this brown more faded ink, that is iron gall ink,” she explained. That ink contains ferrous sulphate and acid derived from oak galls.

“And it makes a beautiful ink, but it’s very acidic, if it has too much iron in it, it can attack and oxidize the paper.” Wolcott and her coworkers are constantly looking out for damages on these sheets. 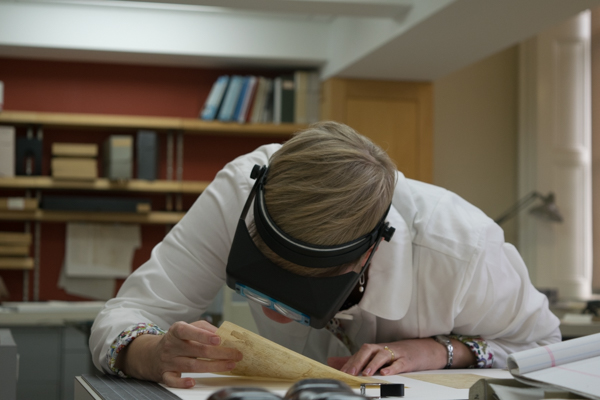 Conservator Renee Wolcott examines one of Jefferson’s lists that was dumped into the river. Thanks to preservation, the document is safe to handle. (Alex Stern/WHYY)

From notes and word lists to living language

Beyond preserving these brittle sheets of paper, there is an effort to preserve the languages of native people. For example, Myaamia, which was described on one of Jefferson’s word lists, is now once again being spoken by members of the Miami tribe – or the Myaamia, as they are called in their own language.

The U.S. government forcefully relocated the Miami tribe multiple times. They were scattered. They faced racism. Fewer and fewer people spoke the language, until the last fluent speakers died in the mid 1900s.

But today, the language is being spoken and taught by many members of the Miami tribe.

Daryl Baldwin has been a crucial player in those efforts. He immersed himself in the language – and pieced it back together, like a puzzle.

“A lot of language records, a lot of data, and the role of linguistics, I can’t say enough, is critically important,” he explained. “We’re fortunate that the Miami language documentation spans almost 270 years. Coupled with that has to be a desire from the community to want to speak their language again.”

Baldwin directs the Miami Center at Miami University in Ohio, which is dedicated to keeping the language and culture of his people alive.

“Language is the core of a group’s identity. And I think that our language communicates our culture most efficiently and effectively,” he said. “Our languages are central to our preservation of our identity and to the transmission of cultural knowledge.”

Baldwin says they had to come up with new words for things like computers, and cell phones. And, the language continues to evolve and change, like all languages.

“What’s most important for me is that all Miami people, no matter their age, or how connected they are to the community have a right to their heritage and language.”

His children speak the language, and his first grandchild is already saying a few Myaamia words.

Bit by a tick in New Jersey? Rutgers scientists want you to mail it in

Rutgers researchers are on a mission to recruit “citizen scientists” as part of NJ Ticks 4 Science.

The 180-foot-long Texas Star is the latest addition to a massive artificial reef system, joining hundreds of New York City subway cars and a Navy destroyer.

They are finding that several animals like to make a meal out of the pests.