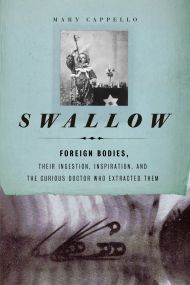 [Rebroadcast] Philadelphia is home to the Mutter Museum, a medical museum famous for its anatomical specimens and medical oddities.  One of the most interesting collections is in a set of drawers that contain nearly 2,000 objects that were swallowed and then extracted without surgery by renowned laryngologist Chevalier Jackson in the early 20th century.  Jackson’s Foreign Body Collection at the Mutter Museum includes wristwatches, nails, umbrella tips, toy opera glasses, pins, and Christmas ornaments.  Jackson was a pioneer in the medical profession and his life and work is the subject of a new book, Swallow: Foreign Bodies, Their Ingestion, Inspiration, and the Curious Doctor Who Extracted Them by MARY CAPPELLO.  Marty talks with Cappello, a professor of English at the University of Rhode Island, about Jackson, his life, his contributions to medicine, and his curious collection.  We’ll also talk with MICHAEL ANGELO, archivist and historian at Thomas Jefferson University, where Jackson did some of his medical training.

U.S. health officials said Thursday a company is recalling its over-the-counter eye drops that have been linked to an outbreak of drug-resistant infections.

An unprecedented Spotlight PA analysis of 1 million medical marijuana certifications reveals how a change by policymakers made it possible for virtually anyone to get a card.