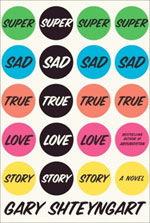 Novelist GARY SHTEYNGART was already a critically acclaimed writer before he was featured in The New Yorker’s “20 Under 40” this summer for his debut novel, “The Russian Debutante’s Handbook,” published in 2003. Radio Times invites Shteyngart back to Radio Times to discuss his latest novel, “Super Sad True Love Story,” a love story within a political satire that takes place in a National Guard-patrolled New York City in the very near future where people stream their lives instead of living them, among other futuristic cultural oddities.