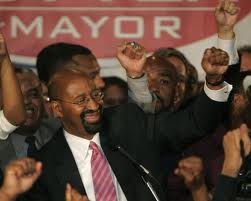 With Philadelphia’s May 17th primary election just around the corner, it looks like the only Democrat who wants to be mayor is the mayor.  A recent Franklin and Marshall College poll found that 53% of the City’s voters are less than pleased with Mayor Nutter’s job performance and that its time for someone else to move into City Hall.  So where are all the contenders?  On the Republican side,  there’s Karen Brown, who had been running as a Democrat for City Council but recently switched parties, and John Featherman a libertarian who has yet to be embraced by the party establishment.  But  in a city where registered Democrats outnumber Republicans by 6 -1, neither Republican candidate seems particularly viable so a Nutter reelection seems like a given.   How come nobody else want to lead our City into the future and what does that say about Mayor Nutter’s first term , his challenges, and Philadelphia politics?  Guest host Tracey Matisak talks to Paul Davies, of the Philadelphia Inquirer, Irv Randolph, of the Philadelphia Tribune and Isaiah Thompson of the Philadelphia City Paper.