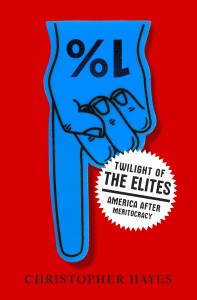 Are those who worked their way to top doing a better job than those who were born into it? CHRIS HAYES, The Nation’s editor-at-large and host of MSNBC’s “UP with Chris Hayes,” feels America is broken and looks at systems of meritocracy in the United States – including universities, corporations, Congress, Major League Baseball – and how continued news of institutional corruption have revealed betrayals of the American people’s trust. Just as a person can get great test scores and work hard to earn their way to the top, that upwardly mobile track can also be gained by rigging the system. A self-defined “scrappy, outerborough kid from the Bronx” who worked his way up to having his own cable network platform through “hard work and pluck,” Hayes looks at complacent, liberal guilt, declining social mobility and the “Cult of Smartness” in his new book, “Twilight of the Elites: America After Meritocracy.”