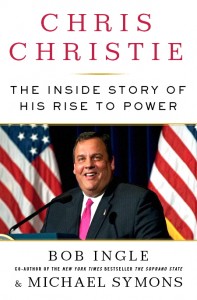 Chris Christie, New Jersey’s bombastic and headline-grabbing governor, has dominated the news cycle in the Garden State since he ousted his Democratic predecessor and declared war on New Jersey’s public-sector unions. His name continues to surface among possible vice-president nominees for Republican standard-bearer Mitt Romney, and Christie says he would have to take that call, though he has repeatedly vowed to finish his term and run for re-election next year. While Christie’s corruption-fighting victories as U.S. Attorney are integral to his public presence and campaign literature, his full story has yet to be told … until now. In the first book-length biography, journalists BOB INGLE and MICHAEL SYMONS detail “Chris Christie: The Inside Story of His Rise to Power.” We’ll talk to Ingle, senior political columnist for Gannett New Jersey newspapers, and Symons, Gannett’s Statehouse reporter, as the budget standoff between Christie and New Jersey’s Democratic legislators comes to a head.