Yellow insects flying in and out of a garden wall might be dangerous yellow jackets — or a colony of escaped honeybees. Mike McGrath, host of You Bet Your Garden, discusses how to tell what you got and then what to do about it. Plus your fabulous phone calls!

Question of the Week:

You mentioned Yellow Jacket nests on a recent show and I found the timing serendipitous, as I just discovered ‘bees’ living in a stone wall in my yard. I think they’re Yellow Jackets, but have not wanted to get close enough to be sure. In any case, there are a lot of them and they are yellow. How would you suggest I deal with these bees?

How to tell if you have bees or yellow jackets » 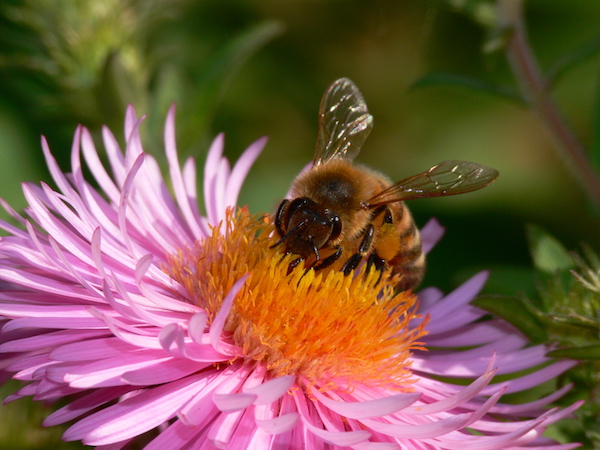 Highlights from this week’s show:

Mike from the Lower East Side of Manhattan worries that his potted plants are attracting black house flies and asks our host what he can do to get rid of them. After further investigation, Mike identifies the pest as fungus gnats, which would indeed be breeding in the soil of his house plants. It didn’t help that our caller has a heavy hand with the watering can, either. “I’m going to recommend BTI, an all-natural larvicide,” Mike says. “We mostly use it against mosquitos.” It comes in donut shaped dunks or as a granular substance available at hardware stores. “The granular form is EPA approved for treating house plants,” Mike says. “…Drenching your plants with BTI and having a lighter hand on the water will get rid of the fungus gnats.” BTI will get rid of any members of the fly family breeding in the wet soil. For the larger, more matured gnats, Mike suggests fly paper. “There is nothing better than old fashioned rolls of fly paper.”

How to prevent a zucchini disaster

Anne from Media, PA had planted a zucchini with her neighbor in their community garden. When the plant began to suffer from either squash borer and/or drought, the two followed instructions given in Mike’s prior shows and managed to rejuvenate the crop by watering. It has left them with not only a healed plant, but also new growth! However, Anne isn’t sure what to do in the future to avoid another zucchini crisis. “Make sure that during hot and dry times it gets a long, deep watering at least once a week…maybe twice a week,” Mike says. “Not little waterings every day, they are useless.” He also suggests Anne spread mulch on the soil’s surface to keep the water in, and to check and see if the vine was damaged. “If you see damage, just heap some soil up around the damaged part, pull off any really destroyed leaves, and enjoy your zucchini!”

Save your garden from herbicides

Carol from Salt Lake City, UT grows an organic heirloom tomato, pepper, and cucumber garden outside her apartment complex. Unfortunately, her land lady arranged for TruGreen to spray on the property, inevitably coating her plants in the herbicides. “Overspray of those kinds of herbicides is very stressful to plants,” Mike says. “You could lose the plants closest to the area of spraying.” For the next couple of days, Carol should get out first thing in the morning and try to wash her plants with a strong stream of water, as much as she can use. “Really soak the ground,” Mike tells her. “Herbicides are more deadly to plants that are hot and dehydrated. The only thing you can do is flush it out with water.” Dilute, Dilute, Dilute. On the outskirts of garden, this could be the difference between life and death for Carol’s plants. Over the winter she should create a temporary guard, even just butcher paper, to physically deflect any chemicals that are applied to the surrounding lawn.

To prune or not to prune

Kevin from Newbern, NC asks Mike if he should prune a newly planted assortment of trees during the fall season. “You should never prune anything in the fall,” Mike says. “In the fall they are trying to go dormant, but pruning stimulates growth.” If these trees are not yet fully asleep and Kevin prunes them, they would have no option but to start growing again. Then, a rare winter cold snap could freeze the sap, ultimately killing a tree. Mike suggests he wait until the spring, after the trees have begun growing again. Kevin had planted a Penn Oak, River Birch clump, Red Maple, Profusion Crab Apple, Stellar Pink Dogwood and Kousa Dogwood, which should make for a colorful yard. “Whoa, Kevin the arborist!” Mike admires his selection. “You’re getting a botanical garden going.” The only tree that truly needs pruning if crowded or misshapen is the Crab Apple, which can be pruned after the flowers have completely faded. “The other trees are always going to look better if you don’t prune them,” Mike says. “Only prune out dead or damaged wood, the entire branch, but don’t cut into the bark of the tree.”