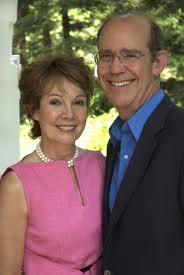 Commanding general of the Army and 34th president of the United States, Dwight D. Eisenhower, retired in Gettysburg, Pennsylvania. His grandson, DAVID EISENHOWER, has chronicled this chapter of his grandfather’s life in his new book co-authored with his wife, Julie Nixon Eisenhower, “Going Home to Glory: A Memoir of Life with Dwight D. Eisenhower, 1961-1969,” a follow-up to David’s 1991 biography, “Eisenhower at War, 1943-1945.” The new book is created from unpublished diaries, letters and David’s own memories as a young man observing his grandfather’s public persona fading as America’s social and political culture was rising. President Eisenhower was also counseling a young Richard Nixon. He’ll come in to the Radio Times studio with his co-author and wife, JULIE NIXON EISENHOWER, President Nixon’s daughter, to discuss his scholarship on his family. David Eisenhower is the Director of the Institute for Public Service at the Annenberg School for Communications at the University of Pennsylvania. Julie Nixon Eisenhower is author of several books including, “Pat Nixon: the Untold Story.”