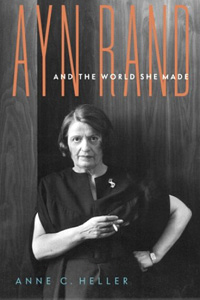 Hour 2
Before Madeline Albright was famous for her pins, writer and philosopher Ayn Rand sported a large dollar-sign broche on her lapels. An advocate of laissez-faire capitalism and individual rights, Rand’s political objectivism is cynical of “Big Government,” in which Libertarians resonate. Rand’s most famous novels Atlas Shrugged and The Fountainhead are hot sellers in this year of economic collapse. Cable TV host Glenn Beck quotes Rand, designer Ralph Lauren cites Rand’s inspiration and Former Federal Reserve Chairman Alan Greenspan was a devote of her philosophy. Our guest, writer Anne C. Heller, takes us from Rand’s childhood during the Russian Bolshevik Revolution through her personal and political writer life as a screenwriter and intellectual in the United States. Heller’s new book is called, Ayn Rand and the World She Made.
Listen to the mp3