This story originally appeared on The Philadelphia Inquirer.

For years, Glenda Banner donated food to the Somerton Interfaith Food Bank, housed in a tiny, 120-year-old white chapel that sits in a quiet, green slice of Philadelphia more like a suburban hamlet than a city neighborhood.

But five years ago, Banner, 62, who is a widow and has lived in the Northeast since 1975, suffered a stroke that ended her 35 years of employment as a healthcare worker.

Misfortune has turned Banner, now dependent on disability income, into a client of the food bank, relying on cans of beans and tuna not unlike the ones she used to tote to those in need.

“I once gave to this place, but now…,” she said, her voice trailing off. “You just don’t know how you’re going to end up in this world.”

Northeast Philadelphia has long been recognized as a place apart, a middle-class American dreamscape of tidy homes that conspicuously broadcast their occupants’ arrival in the milk-and-honey precincts far from the city’s traditionally troubled districts.

While much of the Northeast retains that singular distinctiveness, the storied enclave of some 300,000 residents has seen poverty become a burgeoning and unwanted feature over the last generation as people age into fixed incomes, immigrants move in, and poor families leave gentrifying neighborhoods elsewhere in the city for more affordable environs. Some social scientists also point to another force at work since the mid-1990s with the introduction of federal Section 8 housing vouchers, which allowed low-income residents of North and West Philadelphia, among other sectors, to relocate there.

An Inquirer analysis of U.S. Census figures shows how the number of those living in poverty in the Northeast has expanded — in some cases, by astonishing amounts — within 27 years. For a family of three, the federal poverty line is $21,330.

For example, between 1990 and 2017 (the latest figures available), the number of residents living in poverty in Mayfair rose from 939 to 4,884, a 420% jump. Of all Philadelphia neighborhoods, Mayfair registered the largest single increase during that time period. 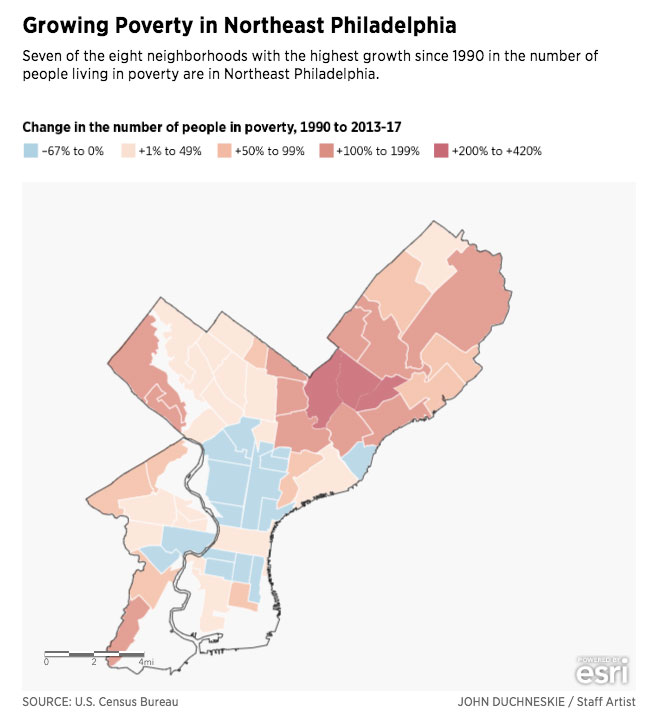 It’s doubly confounding, Collazzo added, because the Northeast is doing well, real estate-wise. There are few commercial-space vacancies, and overall property values are up, he said. The median house price there this year is $178,000, according to Kevin Gillen, a real estate expert at Drexel University.

(The latest federal figures on poverty, which will describe the poverty rates of Philadelphia as a whole, as well as those of the suburban counties, will be released by the U.S. Census Bureau on Sept. 26.)

Of the more than 80,000 people aged 60 and above living in the Northeast, 13% were in poverty in 2018, up from 9% in 2010, according to Allen Glicksman, director of research and evaluation at Philadelphia Corporation for Aging.

As residents retire, their incomes decrease and savings get sapped, Gralnick said. “We’re seeing older adults aging in place and living longer than they thought,” with less money, he added.

Meanwhile, the Northeast has continued to welcome immigrants — Russians, Middle Easterners, Central and Southeastern Asians, and Latinos among them — many of whom struggle with poverty when they arrive.

Compton Chase, a missionary who runs the Somerton Interfaith Food Pantry as part of St. Andrew’s In-The-Field Episcopal Church, said he’s seen a 65% increase in his number of clients in the last few years, now just under 1,000. Many are either Russian or Ukrainian immigrants.

Evidence of immigrant need is widespread.

Philadelphia’s largest office of WIC, a federal nutrition program serving low-income children and mothers, is in Rhawnhurst, according to Linda Kilby, executive director at NORTH, Inc.Managers of the Philadelphia WIC Program. (WIC stands for the Special Supplemental Nutrition Program for Women, Infants, and Children.

Many of the 10,000 clients are immigrants “from all over the world,” Kilby said, “Russia, South America, other places.”

Meanwhile, at Feast of Justice food pantry in Mayfair, one of the largest in the city with 6,000 clients, Pastor Tricia Neale said she saw her Latino population increase from 10% to 12% in the last year alone. The pantry’s Asian clientele is around 8% and holding steady, she said. The segment of white clients is dropping a bit, but still hovers around 44%, many of whom are elderly, Neale added. It’s possible that several others may be family members who lost income after their loved ones succumbed to opioid addiction, she said.

Is gentrification making the Northeast poorer?

Gentrification in various parts of the city may also be contributing to poverty in the Northeast, although it’s difficult to track, said Neale.

Still, she added, “Zoning changes up here are constantly turning houses into duplexes and triplexes, bringing down rents in some places and permitting lower-income individuals to move in.”

Increases in poverty in the Northeast are getting the attention of leaders at Share Food Program, which distributes food to around 600 pantries in Philadelphia and Montgomery County.

George Matysik, executive director, said a recent survey of pantries shows that there’s been a decline in need among those located in gentrifying neighborhoods, where development pushes out those in poverty.

“I’ve seen need drop in my pantry in Brewerytown from 80 to 25 people,” said Linda Gerald, whose place is in Peniel Baptist Church. She said she’d been serving residents of nearby housing projects, but development has caused them to move out, several of them to the Northeast, as higher income people settle in.

As the city gentrifies, poverty isn’t being solved, but merely moved outward, said Matysik, who added that he believes, based on anecdotal evidence, that many displaced people in poverty are moving to the Northeast.

As a result, he said, Share is in the process of “building out deeper pantry networks in the Northeast, where historically you don’t see as much anti-poverty infrastructure.

“We want to recruit organizations to help us feed people, but also use food as a gateway to bring other services to low-income people in the Northeast.”

Although it’s clear that need in the Northeast has been growing over time, the reputations of neighborhoods change slowly. That’s why some folks are still surprised to hear of poverty there.

“I’ve lived here for 46 years,” said Jean Kealtor, a volunteer at the Somerton Interfaith Food Bank. “People looked at us all that time as the rich folks.

“It’s not that way anymore. We didn’t need a food bank 46 years ago.

The Philadelphia Inquirer is one of 21 news organizations producing Broke in Philly, a collaborative reporting project on solutions to poverty and the city’s push toward economic justice. See all of our reporting at brokeinphilly.org.

‘We all belong to this place’: Public art project shines a light on the people who make the Italian Market thrive

A new project by artist Michelle Angela Ortiz centers on the immigrant communities that live and work along South Philly’s Italian Market.

The Rebuild initiative aims to make up for years of disinvestment. Amid the gun violence crisis, some residents say upgrades are not happening fast enough.

HUD has again approved a contract extension sought by the complex’s longtime owner.