The Philadelphia 76ers are getting ready to hit the hardwood in a couple of months following last season’s finish in the Eastern Conference Semifinals.

The Sixers revealed its regular season schedule Wednesday. The team will kick things off as part of the NBA’s Opening Night, with a nationally televised away game on Oct. 18 against the defending Eastern Conference Champions, the Boston Celtics. The game starts at 7:30 p.m. and will be shown on TNT.

The Wells Fargo Center will welcome the Sixers back just two days later on Oct. 20 when the Greek Freak, Giannis Antetokounmpo, and the Milwaukee Bucks come to town. That game will also be shown on TNT at 7:30 p.m.

On November 8th, Election Day, the NBA will not be hosting games to encourage fans to vote in the midterms. The league says over the next few months, teams will provide information on their state’s voting process and voter registration deadlines in order to help fans make a plan to vote. On Nov. 7 Philly will play the Phoenix Suns at home at 8 p.m.

On Nov. 22, the Brooklyn Nets will head to Philly to play a nationally televised game featuring former MVP James Harden and former All-Star Ben Simmons. The two players were the centerpieces in the big trade made last season. The game starts at 7:30 p.m. and will be shown on TNT. The 76ers will close the season with an away game against the Nets on Apr. 9, 2023.

The Sixers are also scheduled to play on Christmas Day against the New York Knicks at Madison Square Garden. The game starts at noon and will be televised on ESPN.

If the season’s start is too far away for you, the 76ers will be playing preseason games starting Oct. 3.

Philadelphia is looking to make another playoff run this year. The team re-signed James Harden, and added P.J. Tucker and Danuel House Jr. during the free agency period. Joel Embiid is also looking to build off of another stellar season during which he led the league in scoring, nabbed another All-Star nomination, and was named to the All-NBA Second Team.

Rumors are also circulating surrounding the 76ers possibly landing another star to team with Embiid and Co. According to sports reporter Marc Stein, Kevin Durant has named Philadelphia as a potential landing spot for a trade. However, Durant also mentioned potentially going to Phoenix, Miami, or Boston. 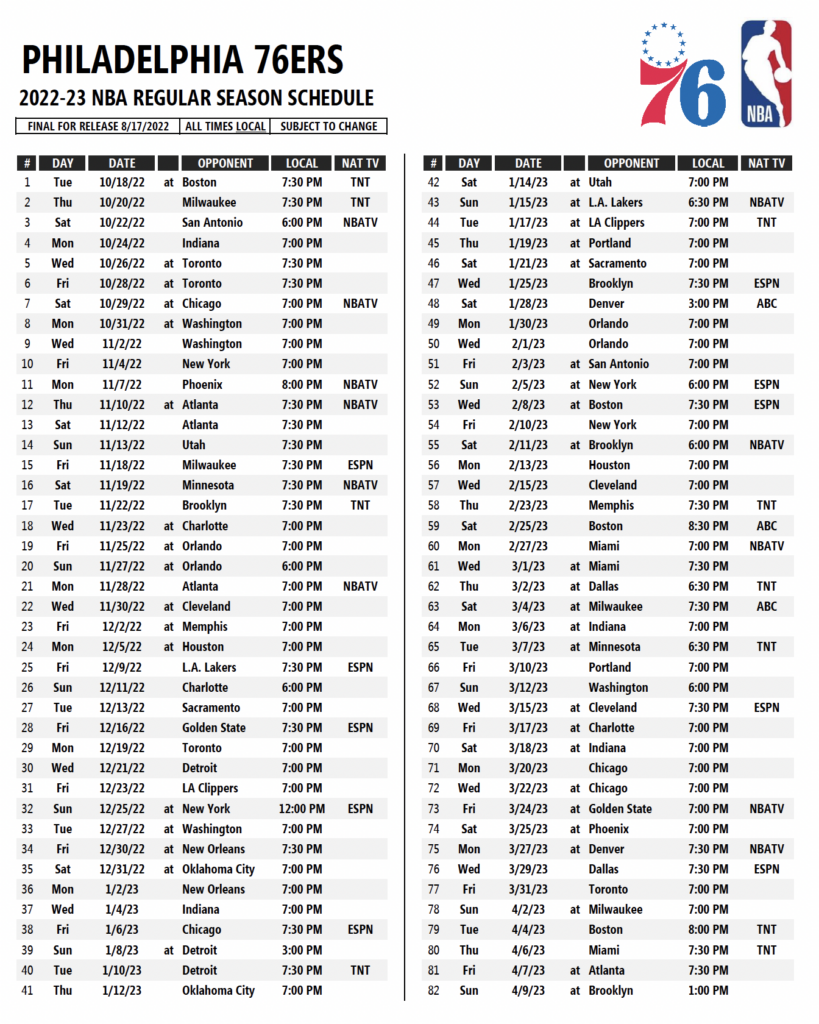 The team's lease at the Wells Fargo Center is up in 2031.

Three people were injured in the first shooting, one in the second, and 17 in what police described as an exchange of gunfire between two groups of people.