He’d better be. Boraie Development LLC, where he’s the vice president, just spent close to a year and a half on an $85 million residential project in the South Inlet neighborhood, the first private, market-rate project that is not a casino the city has seen in years.

The sales team is almost ready to start signing leases on the first phase, 250 rental units between Atlantic and Pacific avenues now dubbed 600 NoBe, for North Beach, at 600 Atlantic Ave. 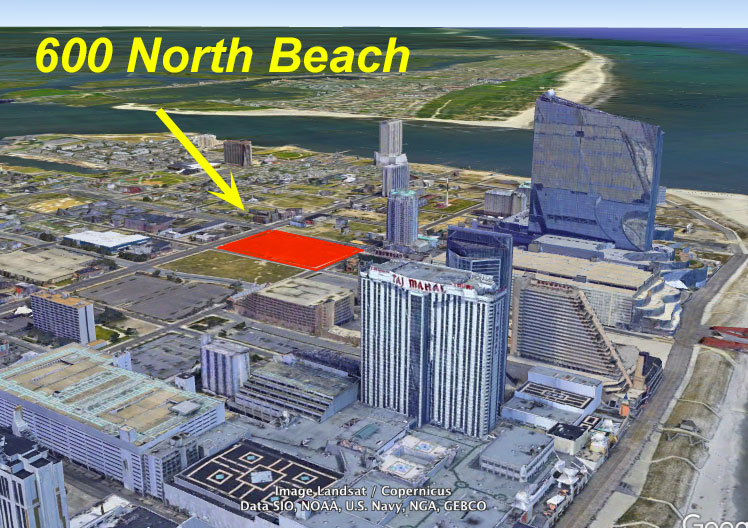 Sitting in an office in a temporary building on the next block, Boraie called Atlantic City the gem of the Jersey Shore, citing its beaches, dining and the concerts and shows lined up for the new Hard Rock Hotel and Casino a couple of blocks away.

It’s not a description often applied to the venerable seaside resort. The New York Post described it as a city built on failure, in a detailed and sympathetic portrait in 2014, while Business Insider called it a “ghost town” in 2016.

But after a punishing run of casino closures, Atlantic City may be coming around. In addition to the Boraie project, two new casinos opened their doors this year in the formerly closed building – the previously mentioned Hard Rock and Ocean Resort Casino in the former Revel, with its shining glass tower looming over 600 NoBe when viewed from Atlantic Avenue.

At the other end of town, the first class of students was moving into a new beachfront Atlantic City campus for Stockton University. All told, several accounts estimate about $1 billion in new investment flowed into Atlantic City this year.

But that wasn’t what convinced Boraie.

The development is a block from the beach and Boardwalk, and not much farther to Absecon Inlet. The apartments on the north side of the development will have a view of the historic Absecon Lighthouse.

The project site, both the first phase nearing completion and the planned location of the next phase across New Jersey Avenue, was once home to a year-round community. But that was decades ago before a 1960s push for urban renewal razed entire neighborhoods to clear the way for development that seemed unlikely to ever come.

Pauline Hill was the director of the Atlantic City Housing Authority at that time, and the wide, empty lot in the South Inlet neighborhood became known as Pauline’s Prairie. Plan after plan after plan was floated over the next 50 years — with each destined to fall through. It may come as little surprise that, when Boraie came to town in 2012 with a proposal for a residential and commercial development, there were some skeptics.

But there were also some believers. The Casino Reinvestment Development Authority — the group that invests funds culled from a room tax, casino revenues and a luxury tax in local projects — put $15 million toward what was then called the Beach at South Inlet.

That kind of investment helps make the numbers work, Boraie said, but it wasn’t the deciding factor on building in Atlantic City.

“Our hypothesis was, the lack of real opportunity to buy land and build new product was why Atlantic City had a reputation of a place no one wanted to live,” he said. Some had advised him to start off with 50 units and build up from there, but a smaller project would not have had the same impact or bring the same opportunity to rewrite the neighborhood and the city.

“For us, if you did build a small development, it would not create the right catalyst for the city. So we decided to go all in and do 250 units in the first phase,” he said. “It’s a massive project.”

Joe Kelly, the president of the Greater Atlantic City Chamber of Commerce, sees the project as proof that efforts to diversify Atlantic City’s economy are starting to pay off. The casinos will remain the cornerstone of the local economy, he said. But in the face of new competition, Atlantic City must broaden its base and look beyond gaming.

“We’re very happy to have the investment,” Kelly said.

The development includes an outdoor pool above the parking area and ringed by the apartments; a gymnasium for residents; a business center and what Boraie described as luxury finishes. Retail spaces on the ground floor help the numbers, he said, but also add to the living experience for residents.

“We have units that you can’t find anywhere else on the Shore,” he said. “We have an amenity package like nothing anyone’s ever seen at the Shore for private housing.”

Phase II on the horizon

Walking the property, Boraie pointed out the architect’s rendering printed on the side of the security fence, noting that it looks exactly like the scene behind it.

“I built exactly what I said I would build,” he said.

Atlantic City has had a long history of boom and bust, along with a reputation for crime and poverty. Boraie claimed the city is actually safer than other cities its size, adding that it continues to attract millions of visitors a year. It offers an array of amenities, along with a local government and a business community eager to make the project work.

“I was the most astonished by how great and encouraging the city is to new development,” he said. “The city really wants to bring a new era of residents, so they’re doing a lot of things to clean the town up.”

Atlantic City Mayor Frank Gilliam sees residential development such as the Boraie project as essential to Atlantic City’s resurgence as they help revitalize the city’s housing market. Speaking from his office on the top floor of City Hall, the mayor said he has watched the project take shape on the long-vacant parcel.

“I’m very excited to see the Boraie family had a vision of Atlantic City. They took a gamble on the city before anyone else did on the housing end,” Gilliam said. Looking forward to the next project phase, he said the project will have a tremendous impact on the neighborhood.

Next up will be the second vacant block on the south side of New Jersey Avenue, now used for the construction office and as a staging area. Eventually, that will be the site of another series of residential apartments.

“I think it’s going to be sooner rather than later,” Boraie said.

The bills passed nearly along party lines Wednesday and Democrats warned that Gov. Tom Wolf will veto them.

The divided House of Representatives voted Wednesday to establish the five-member Select Committee on Restoring Law and Order.