Nominate your neighborhood with your donation now.

Her name is Audra. She works at a restaurant in Pike Creek and she’s been ill since Tuesday, weaker by the hour, her voice faint.

“I’m sick. Chest pain. Sore throat. No voice. Tired. Back Ache,’’ she told WHYY News from the passenger seat of a car driven by her boyfriend. The couple sat in a long line of cars filled with people desperate to get tested for coronavirus.

They jumped at the chance to be one of 1,000 people tested at no cost at the Wilmington Riverfront by ChristianaCare, the state’s largest hospital system. Testing started at 10 a.m. and ran through 2 p.m.

During the four-hour period, 536 people were tested, a spokesman later said. 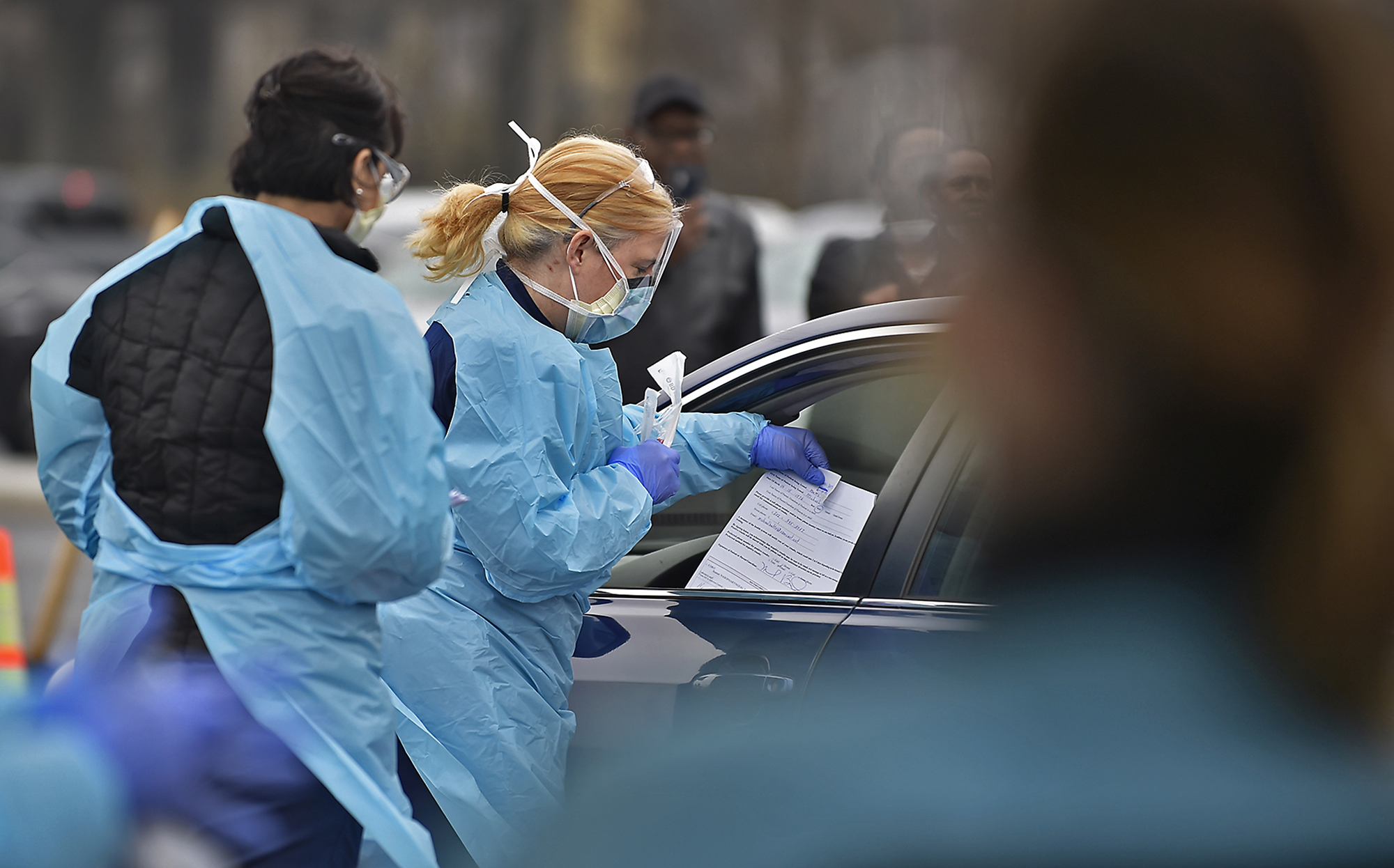 A nurse gives a free test for the coronavirus to a driver at the Riverfront in Wilmington. (Butch Comegys for WHYY)

The state announced four confirmed cases this week, and Gov. Carney responded by declaring a state of emergency, banning price gouging, putting the Delaware National Guard on alert and urging the cancellation of events with at least 100 people.

Shawn Boesen is Audra’s boyfriend. He’s showing no symptoms but said they are worried they will sicken others if they have COVID-19.

She received flu medication from her doctor but got worse so they jumped at the chance to get tested.

“If she’s got it, I got it,’’ Boesen said. “If we are infected then we stay away from everybody but if we’re not we continue on with our lives.”

Boesen was unlikely to be tested because he’s not symptomatic based on the criteria set by ChristianaCare. They are only giving the nasal swabs to people who show signs of the illness, particularly fever, cough and shortness of breath.

“If they are symptomatic we will then provide them with a form that has their demographics,’’ ChristianaCare trauma nurse Joan Pirrung told reporters as her colleagues interviewed people who drove up, many of them wearing masks. “They will be put through the line and drive through with a swab.’’

Tests will be sent to a private laboratory and patients will be notified of the results in two to five  days, hospital officials said. Results also will be shared with public health officials.

Just before 1:30 p.m, Christiana Care announced that testing was over. “We have reached capacity and cannot take any new cars in line,” the hospital system posted on Facebook. Testing continued until 2 p.m. as planned.

As of Thursday afternoon, state public health officials were still awaiting results of 10 people who had previously been tested. Another 30 tests had come back negative.

Since Feb. 7, the state has also monitored 91 people who returned from travel to areas where coronavirus was active. Thirty-five people are currently being monitored as a precaution.

People with questions about coronavirus may call the Division of Public Health’s Coronavirus Call Center at 866-408-1899 from 8:30 a.m. to 4:30 p.m. Monday through Friday, or e-mail DPHCall@delaware.gov.

The four confirmed cases are people associated with the University of Delaware who attended an off-campus event last week. Two are graduate students, one is a professor, and the fourth is a postdoctoral researcher.

Elementary and secondary schools remain open, but the University of Delaware has moved up spring break and along with Delaware State University will move to online learning until further notice.

J&J vaccine to remain in limbo while officials seek evidence

The reports are exceedingly rare — six cases out of more than 7 million U.S. inoculations with the one-dose vaccine.

Philadelphia’s second largest mass clinic, in the middle of the city’s most undervaccinated ZIP code, had to reschedule hundreds of Tuesday appointments.